The Corn Mill at Llangollen

Another ride into Wales again for our section!

Seven of us left the Town Hall on a beautiful morning amid a riot of colour from the ladies taking part in a cancer charity run through the town.  [it was quite a challenge getting to the Town Hall to start with!!] 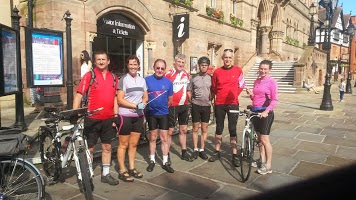 The day turned out to be one of the best so far this year.

We rode out through Lache Lane, Balderton, Lower Kinnerton then Dave turned us right for Pen-y-fford into the first of many hills (for which he is famous!) [but still has the nickname 'shorts' Dave, however many hills he takes us up!]

The morning was really warming up by now as we rode up Warren Dingle and into Barracks Lane. A pause at the top was followed by an easy stretch into Pen-y-fford and the morning coffee stop at Jemoley’s. Here some of our friends from Wirral had cycled over to join us [and we bade farewell to Heather who was only out as far as coffee]. 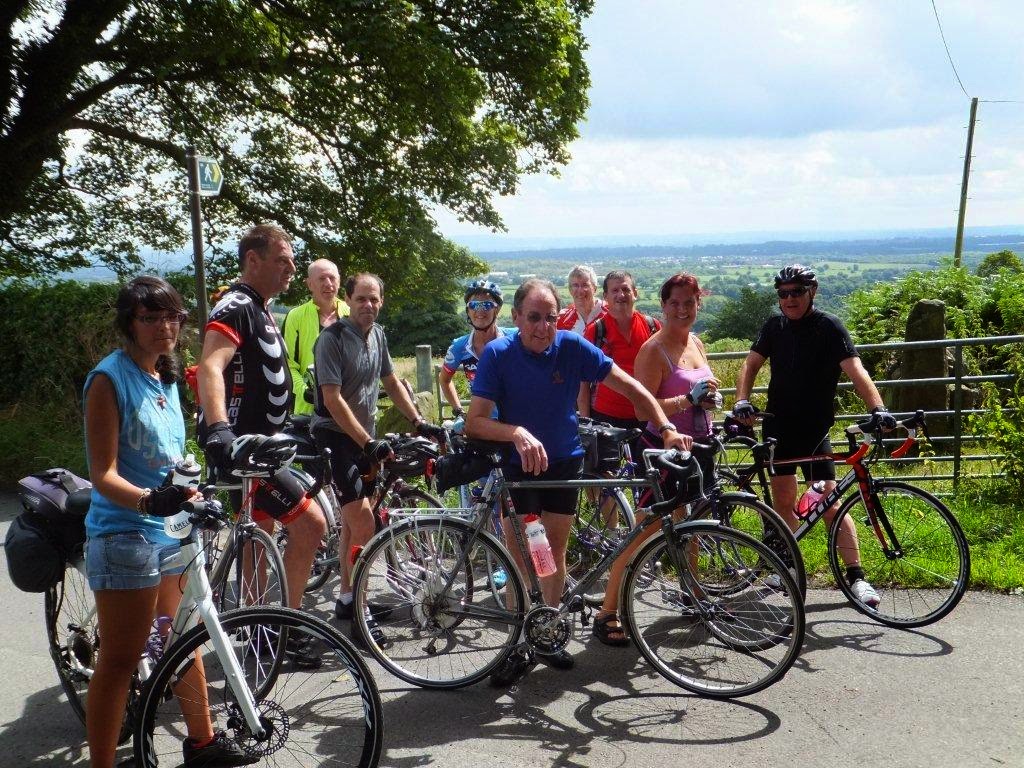 Suitably refreshed we rode to Hope and Caergwrle where a stiff climb up to Cymau reminded us of what was to come. One of us came off crossing a ford at the bottom of a steep downhill lane but was ok, I think the water cooled him off as his performance on the following hills was very commendable.  [Ray has since been looking into waterproof camera's] 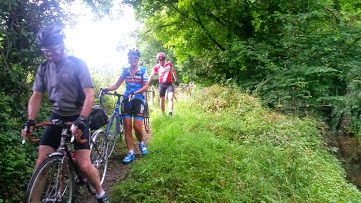 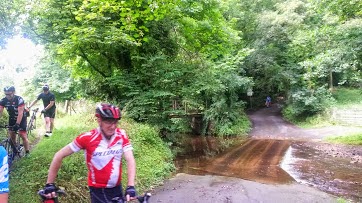 Reaching the B5102 we turned right and another long climb ensued (black arrows on the OS map!) Sue left us at this point as she had to be back earlier [no I didn't leave here!]. On  reaching Minera we were sweating like mad and were able to fill our water bottles, before  the long awaited climb up and over Ecclusham mountain, just as well in the baking heat!

[I left the group just after the water bottle filling, and found three steep hills in Gwynfryn before discovering a delightful track to the Llandegla Mountain bike centre.  With interesting bike parking,maybe not designed for touring bikes!] 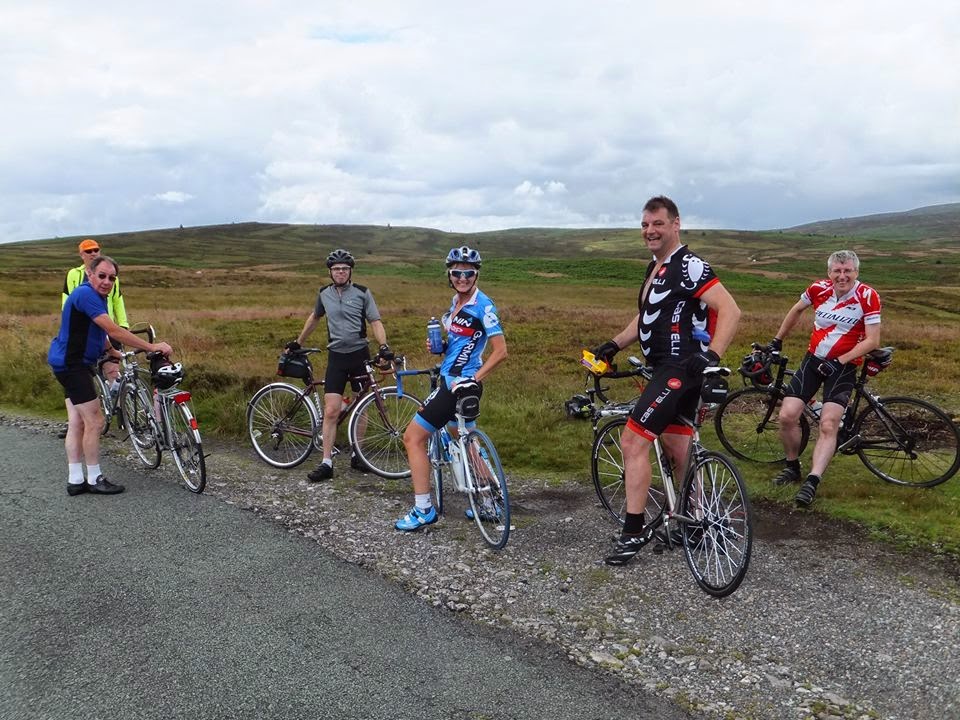 (Bob continues...)  The view from the top was well worth the effort put in and a much needed run downhill through Worlds End, another ford and through the plantations at Eglwyseg took us into Llangollen for our lunch at The Corn Mill. 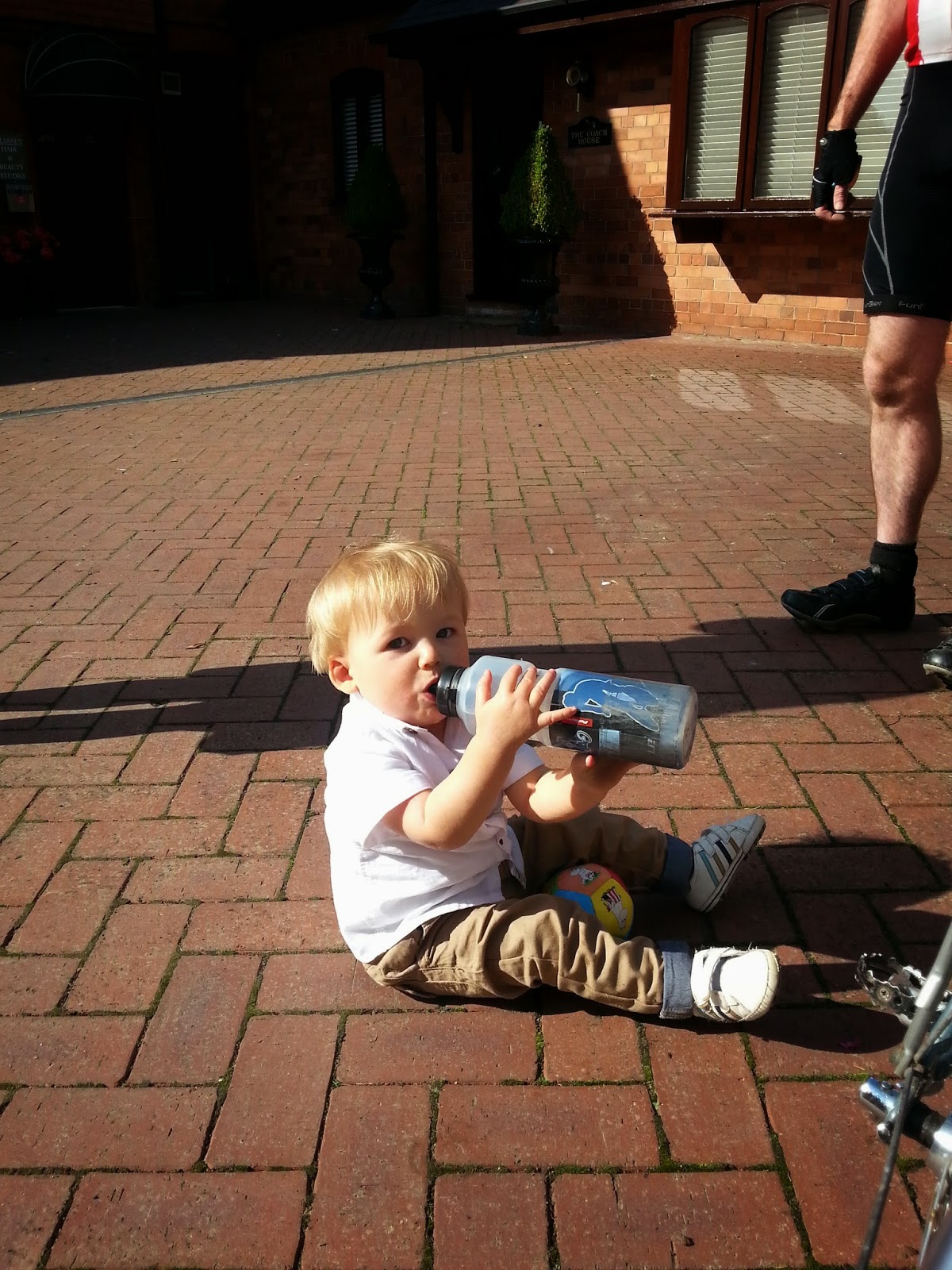 Dave led us back along the Llangollen Canal and at Pont-cysyllte we viewed the famous aqueduct. A little further on our friends from Wirral left us as they had further to get home. the rest of us ran back through Ruabon and made The Plassey Craft Centre for afternoon tea. [I understand that this was where a certain very young cheeky chappie helped himself to someone's waterbottle!]

The superb weather continued for our return to Chester via Bangor On Dee, Cross Lanes, Borras, Trevalyn, Lavister and Eccleston.

A well planned and navigated ride, thanks to Dave.