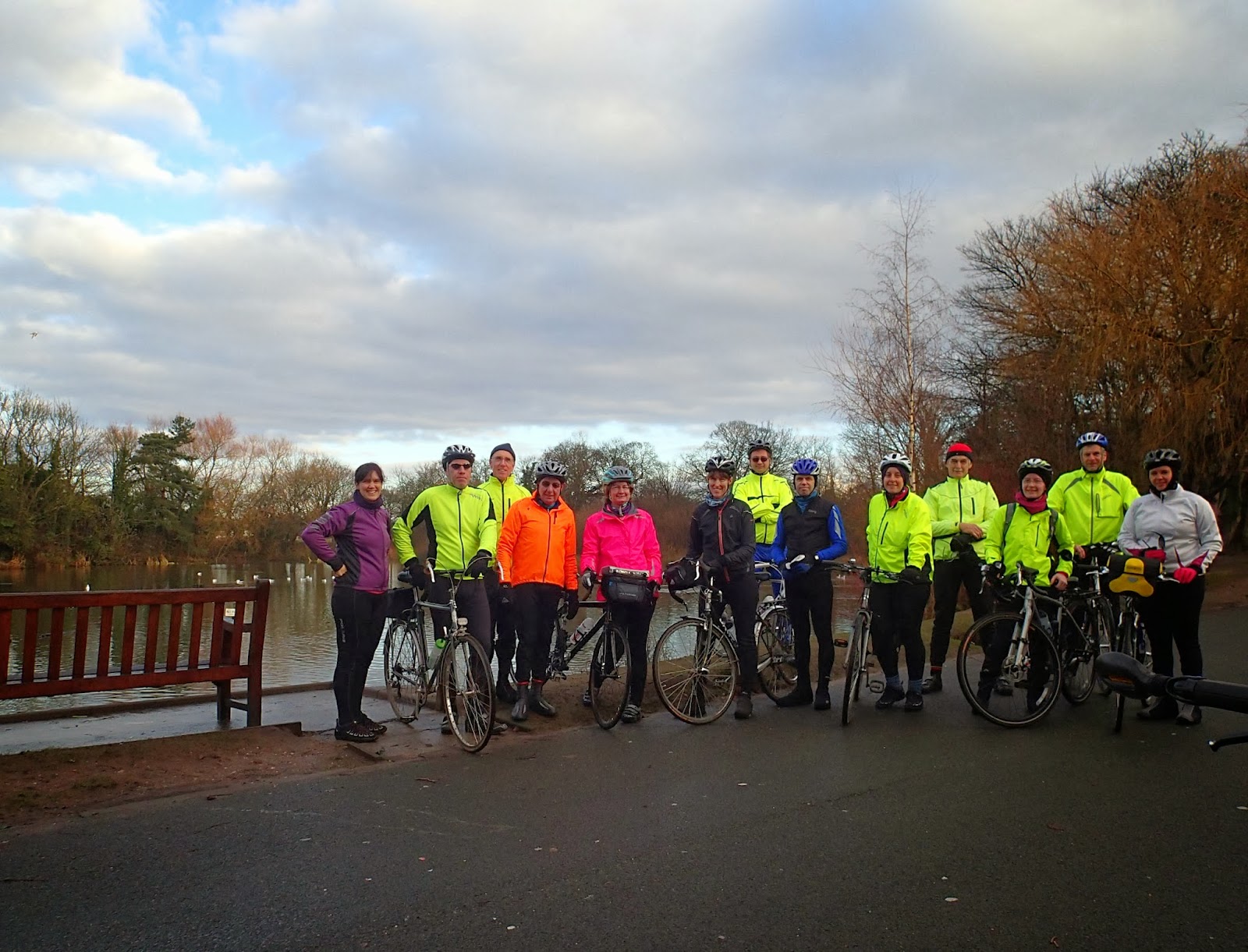 This year, we have added some rides to the Chester CTC itinerary, mostly a second ride per month during the winter months,to bring it equal to the 'summer' months rides.  Today, third Sunday in January was the first of these 'extra' rides; and what a beautiful day it was!  Despite continued deluges in previous days and weeks - widespread flooding for much of the country and flood warnings still in place - the morning dawned with broken cloud and a watery sunrise.

13 met at the pond, and set off following John to Rose Farm at Utkinton. 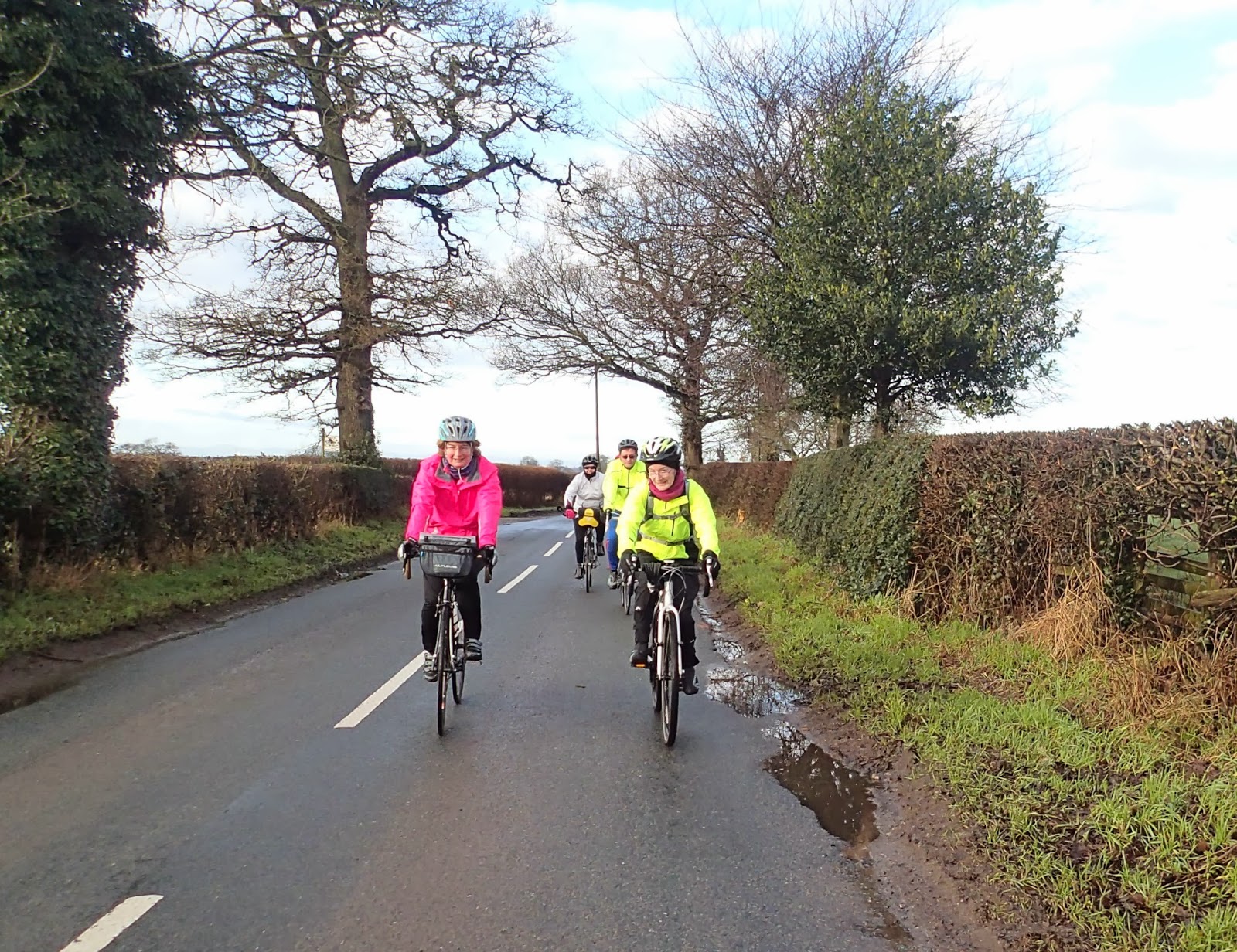 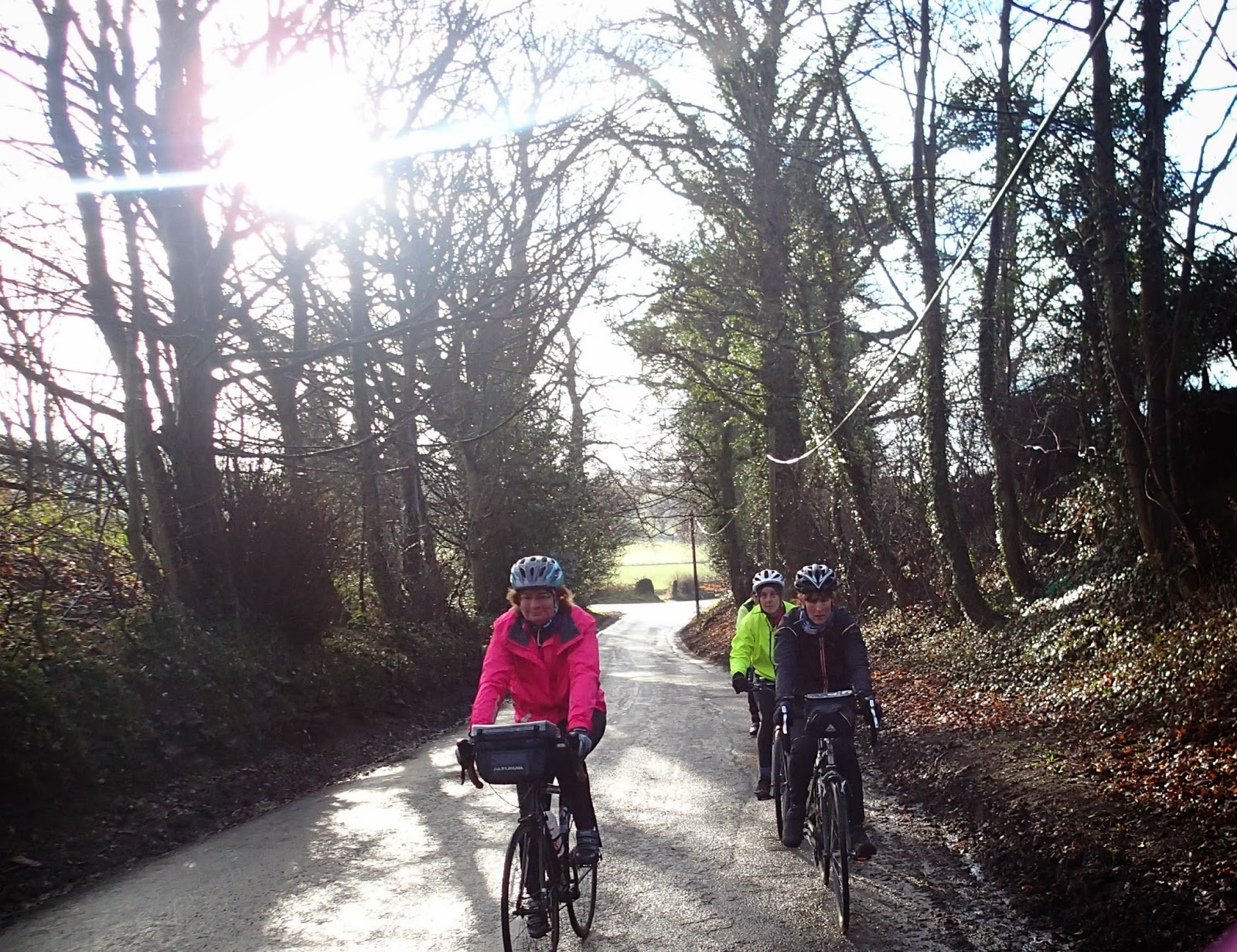 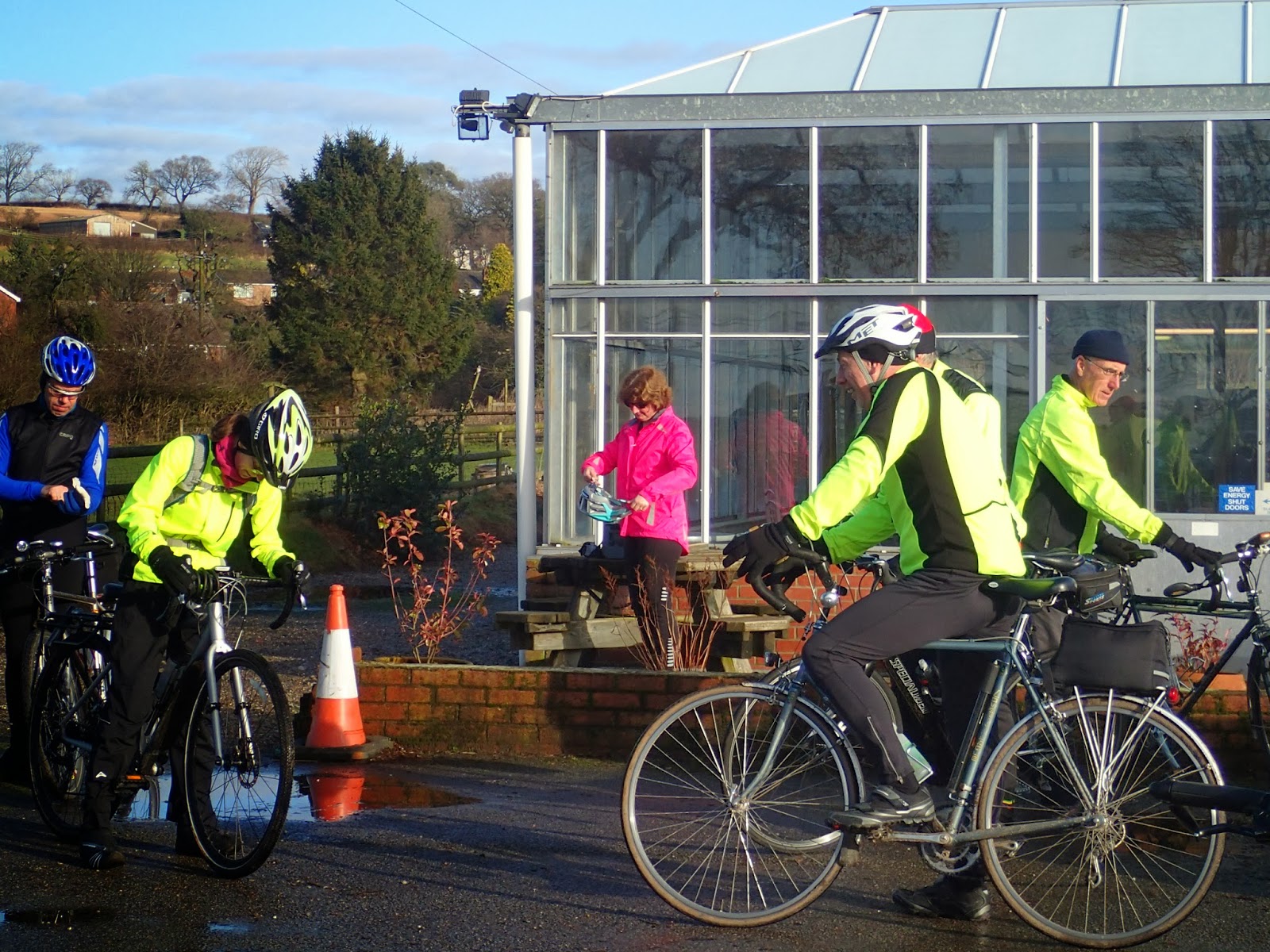 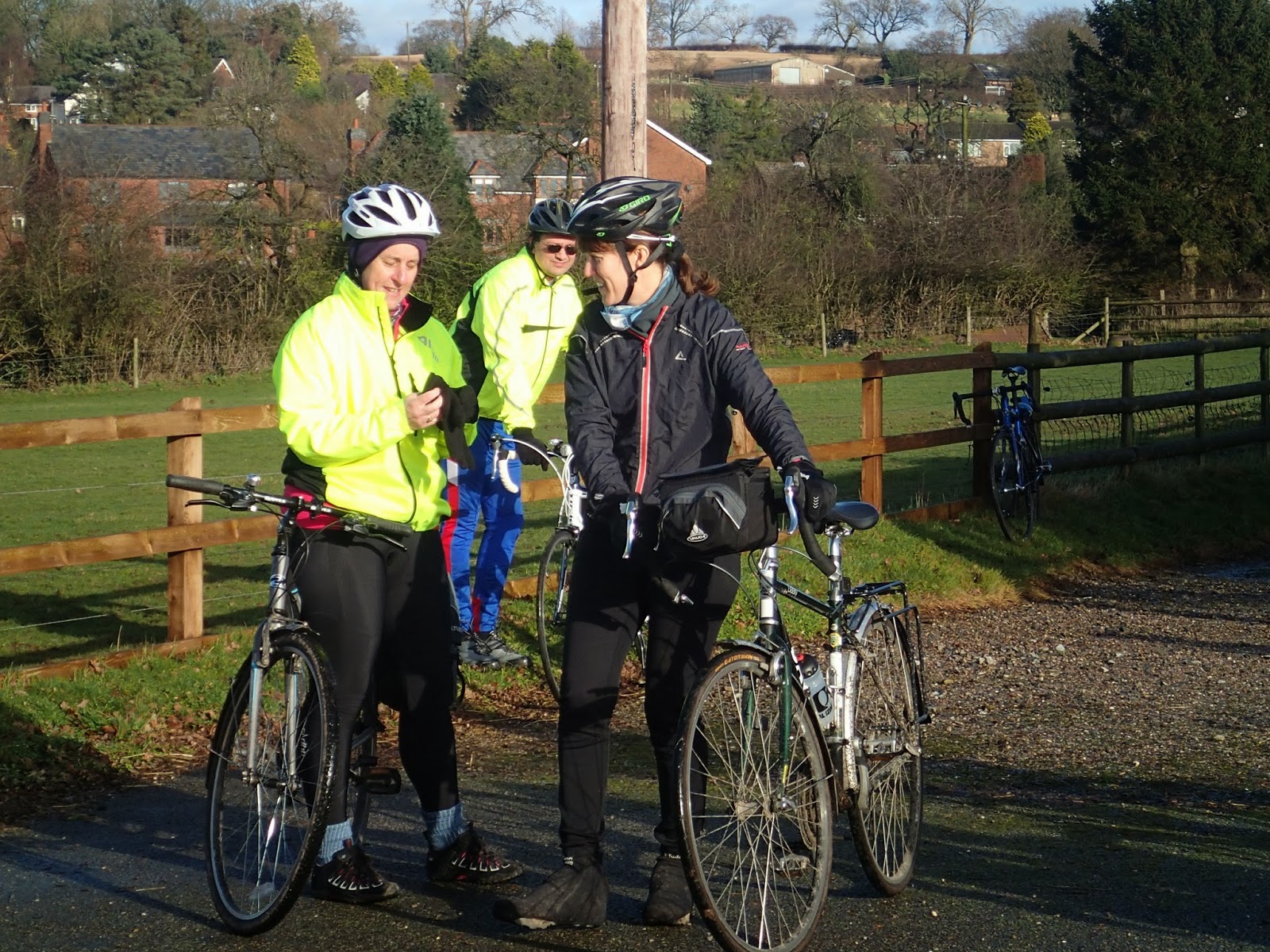 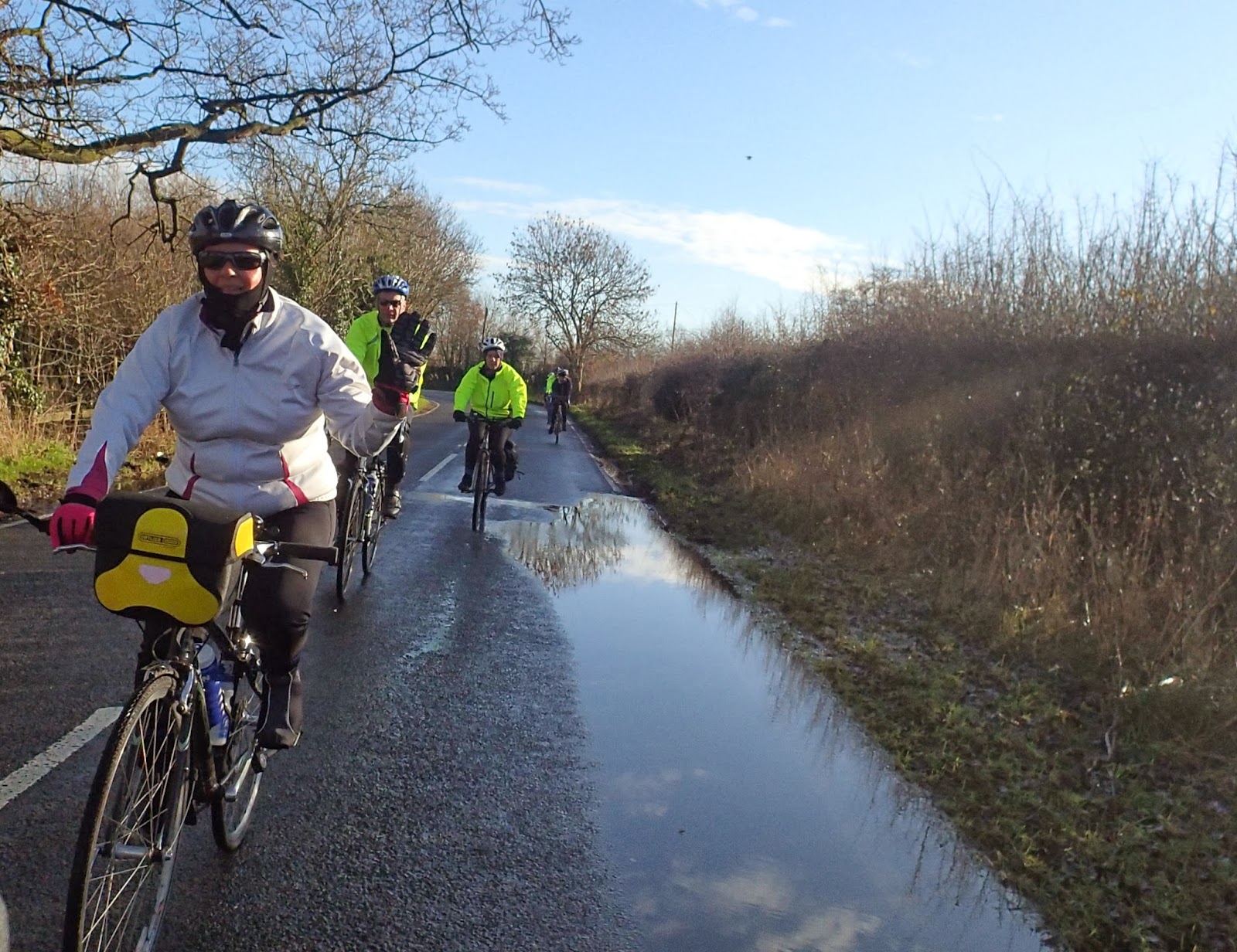 John led a faithful 6 to The Star at Acton,near Nantwich.


A few of us headed back after coffee, giving a morning total of 17 miles back to the pond.
Posted by Purple Sue at 22:58 No comments:

Through the winter months, between September and April, Dave kindly organises a social night for us, to keep the Wednesday summer evenings spirit alive!  It is also an opportunity for potential new riders to come and meet us, and make new friends.

The first one for 2014 was to Kash, a micro brewery small pub at the end of Brook Street and just off Hoole Bridge.

Dave, Bob and I headed out on the circuit first, before heading in at The Bars to Kash, joining Nick and
Martin who were already there.

The pub had a very strong hoppy yeasty smell, which you became accustomed to after a wee while.

A very good turn out, and very strong beer!  I stuck to the Cider, safest bet.  The artwork was superb around the pub walls, apparently painted by the owners son.  Should've taken more pics!
Posted by Purple Sue at 03:30 No comments:

I was not going to post a date for a ride on the 5th Jan, so close after new year and the new years day ride.  It is a good job Dave persuaded me and offered to lead an easy spin out over the Burton Marshes to Thurstaston, as 17 riders turned up!


I had thought we could maybe take up brief residence in the cafe to the north of the Town Hall Square (Coffee Crusade, I think it is or was called) - but it was closed, so plan B was MacDonalds, which I thought of as we circled the square.  Two small coffees and a double espresso later and Bob, Dave and I found some seats to wait.  It was a good spec, as we could see people arrive, and soon a little crowd had formed ready to set off. 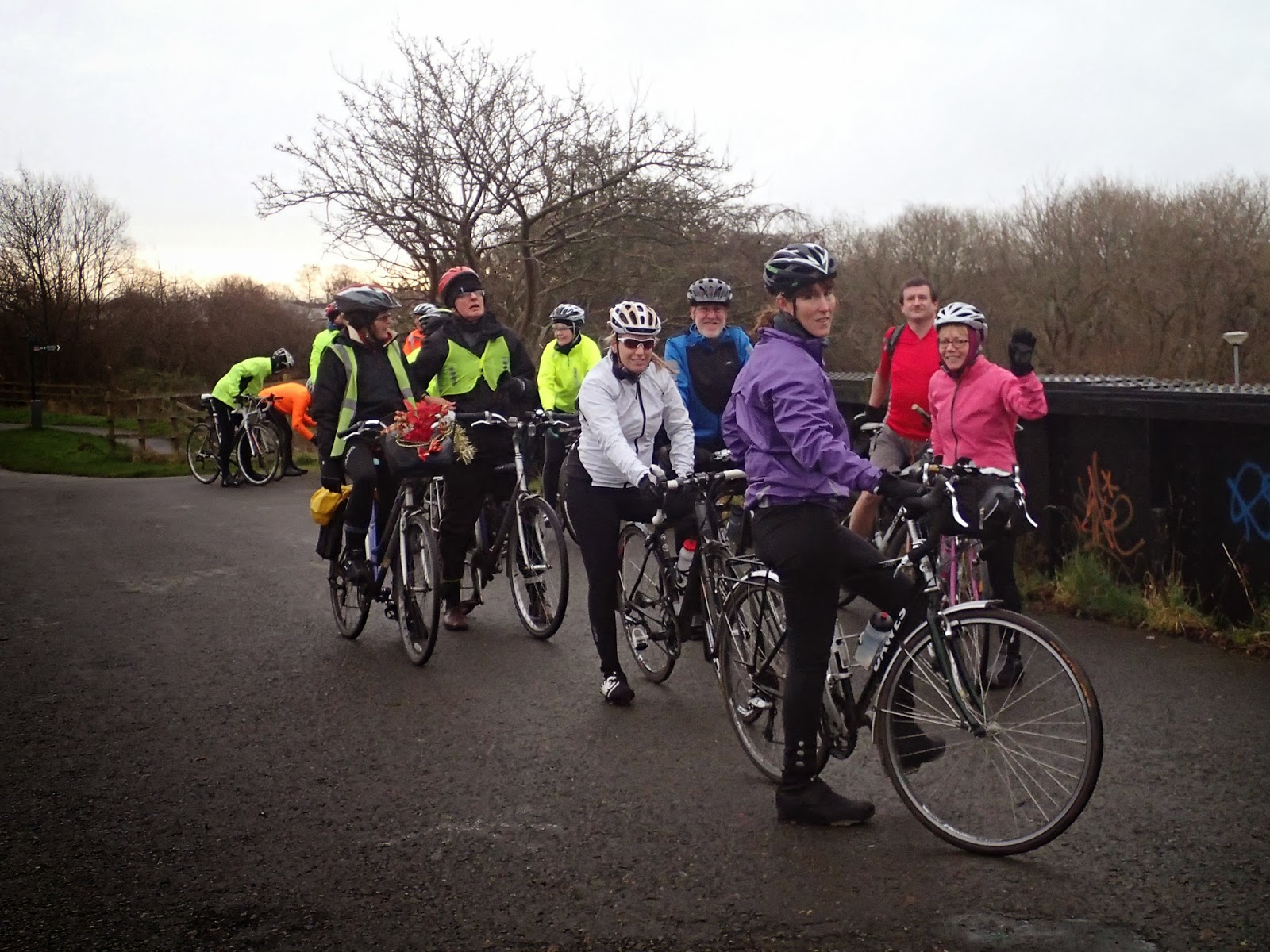 Despite an icy start, the temperature warmed enough to see off the frost, and the Greenway was not as slippy as was feared.  We met Jo-anne and Nosheen on the greenway; as we joined the cycle superhighway (shared bike path!) we paused for effect; I took some photos and Bob, Dave and someone else tried to fix Sue's front gear - it was a little worrying when they resorted to banging it! 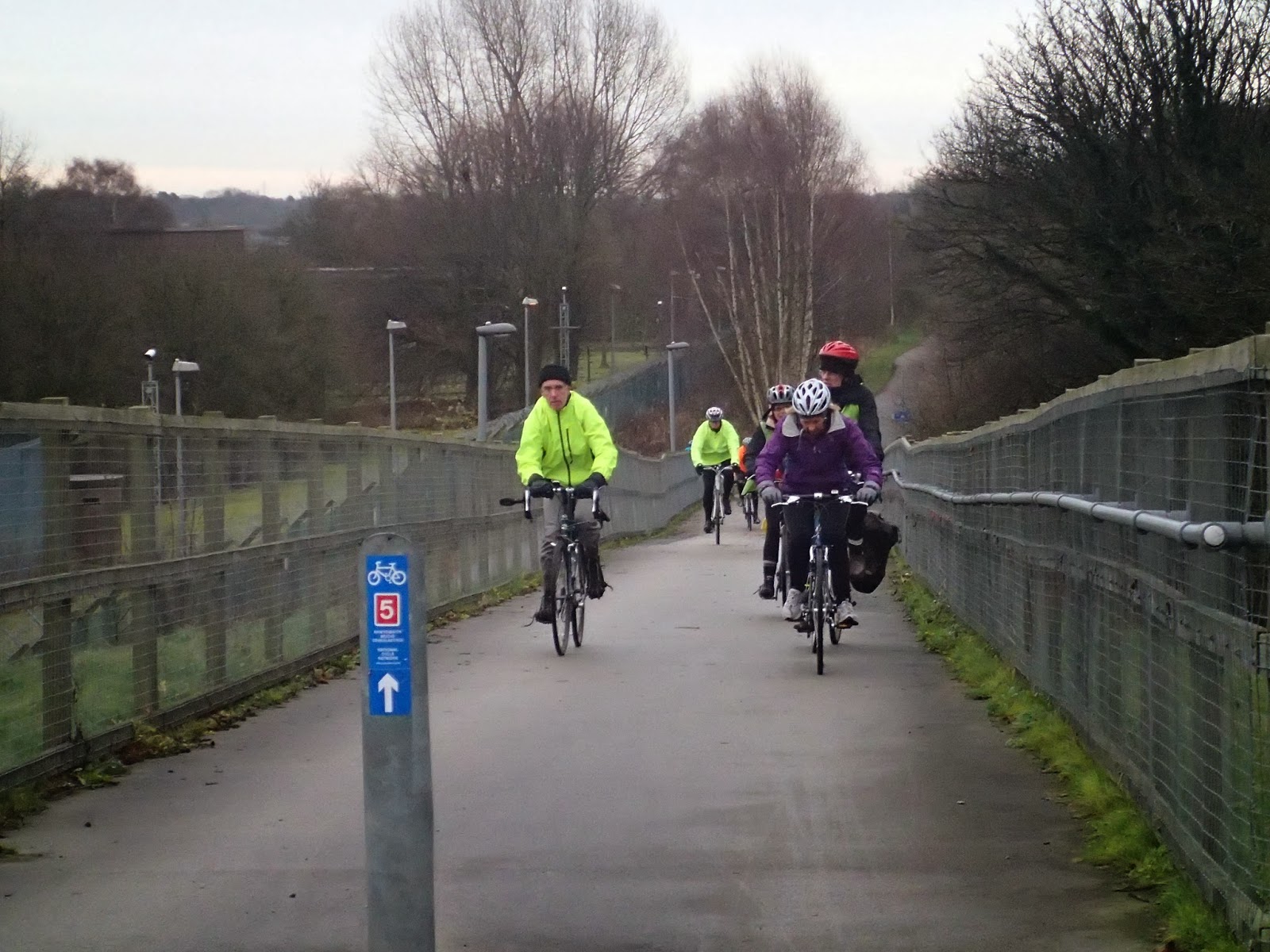 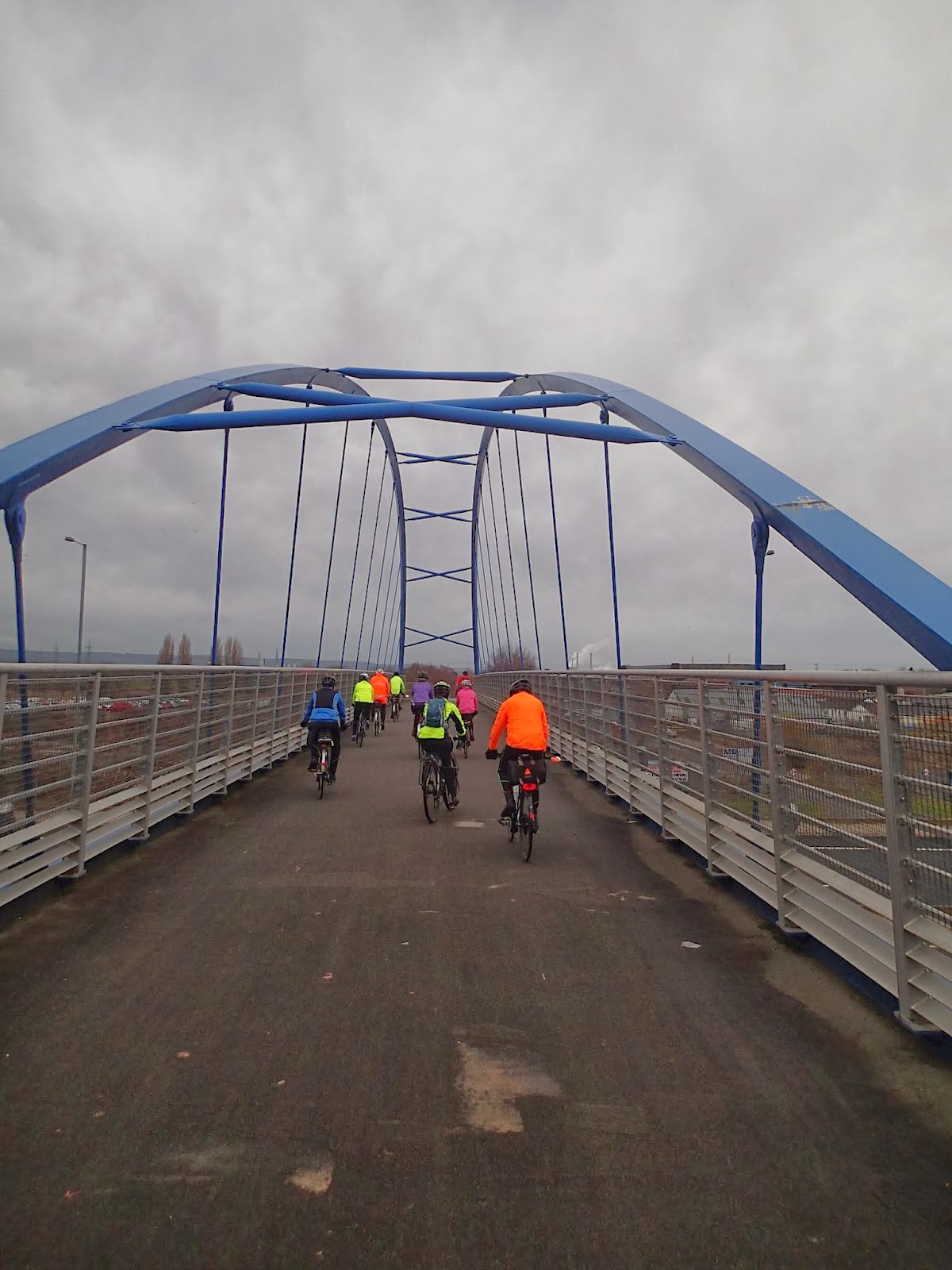 We carried on over the blue bridge, through Deeside industrial estate and to the Marshes, past the sandstone bluff at Burton Point and along to Nets cafe.  On the way we could see piles of grass, later strewn all over the path, and also a large collection of huge gas bottles, pallets, stuff and bits that had been floated in on two recent very high tides in December.

The path was nearly impassible further on! 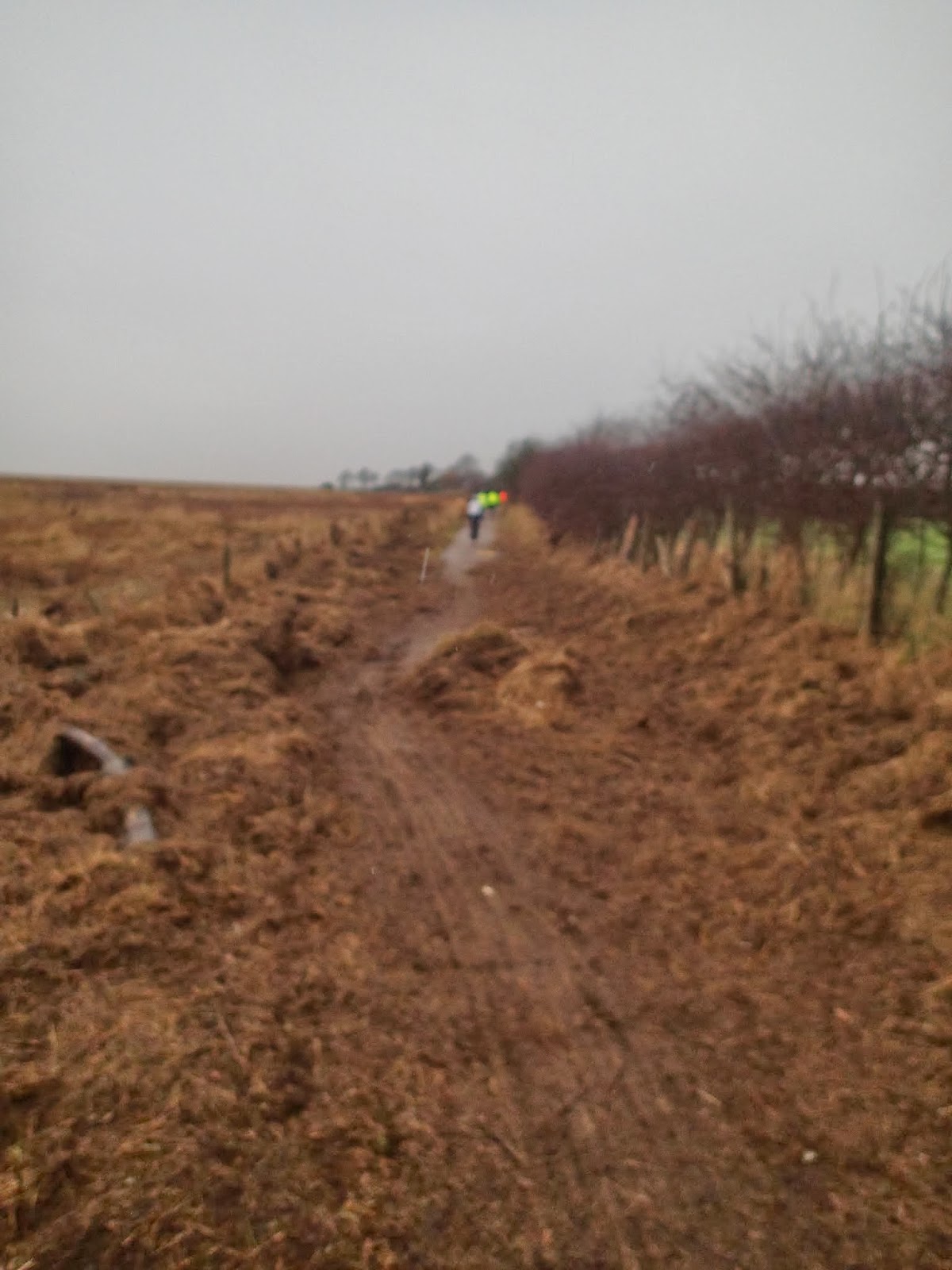 We stopped for refreshments at Nettys cafe, Denhall Fisheries.  It is lovely here in the summer...but Sunday was very cold, and as we sat inside the rain started to come down outside, accompanied by a stiff breeze.


Going to the outside loo was no small feat! 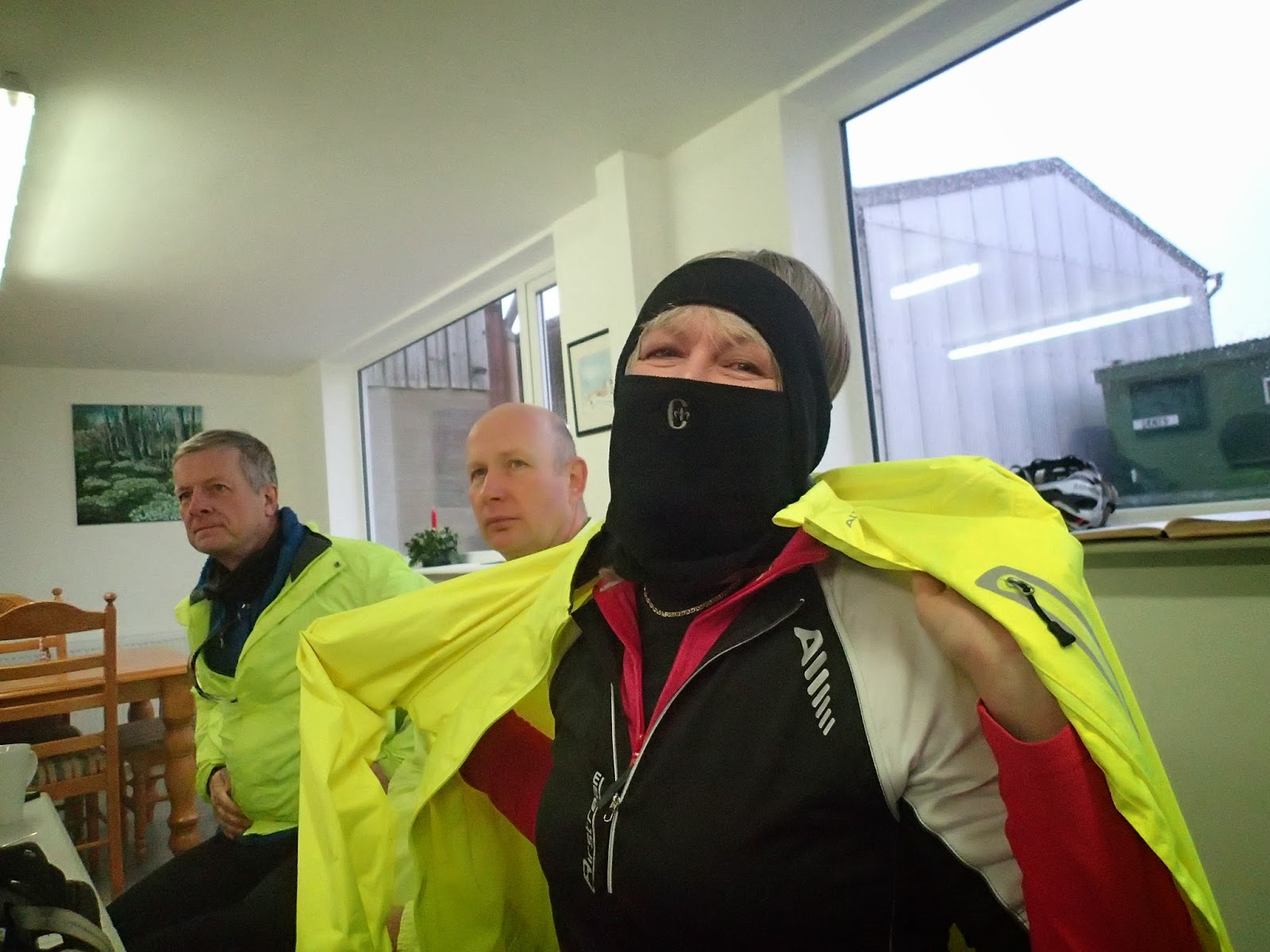 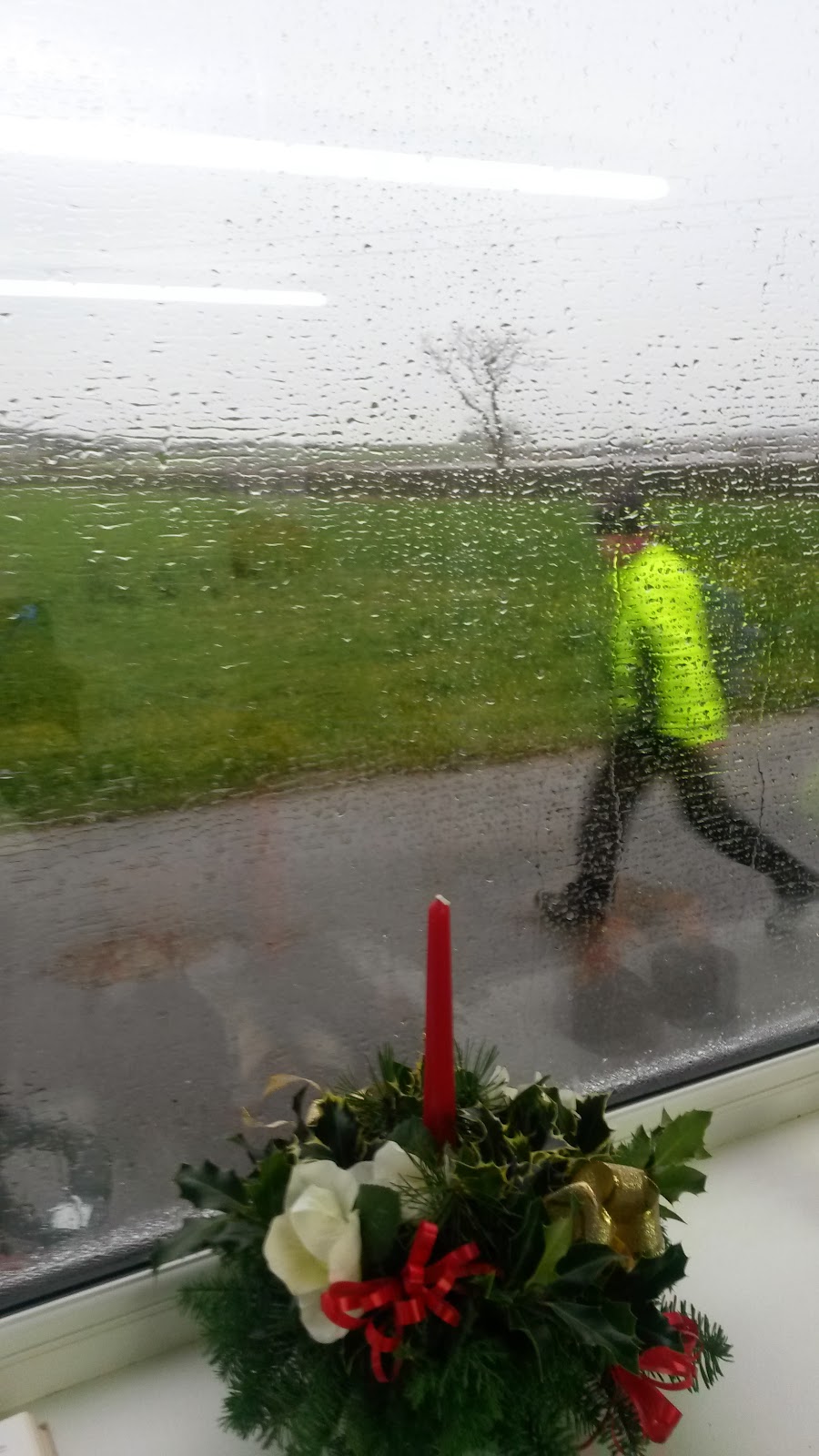 After we had finished I sensed a reluctance to go back outside in to the now rain and wind - although it did not seem as bad as had been forecast - and head on along to the Wirral way. 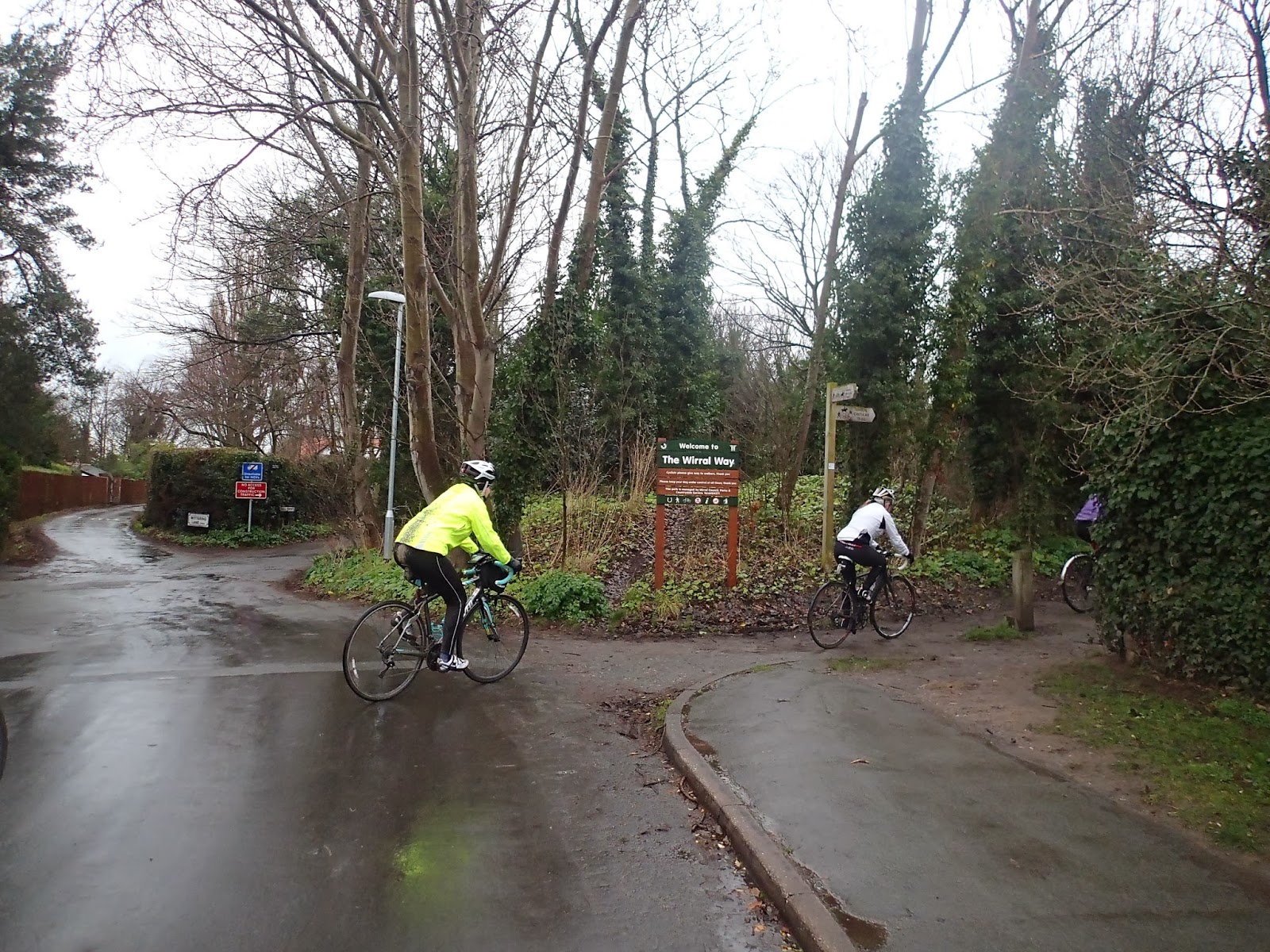 The Wirral way was very muddy and dirty, and the few without mudguards turned their thought to how they were going to sit down in the pub - if even allowed in!  Fortunately they were wearing shorts under their longs, so were allowed in!


A very pleasant lunch enjoyed by all at the Cottage Loaf, run by a cyclist from Chester.  As he had never heard of Chester CTC I wasted no time in taking his email, and Dave and Bob filled him in on all the activities we get up to.


Heading back out, we were faced with a two mile slow climb, now into a headwind, through Irby and Pensby.  By the time we got to Raby, via Thornton Hough, a few people needed a comfort stop (I suspect the beer had worked its way through for a few individuals!)

It was clear that the Tuesday evenings Dave has spent with the Willaston rides were not wasted as he led us effortlessly through to Willaston and then Ledsham, and to the Hosta cafe.  Cake all round!  Bob said to me on the last run into Ledsham, that it was  a shame I had not taken many pictures.  No, only 36 by lunch!

Some more pictures of the day... 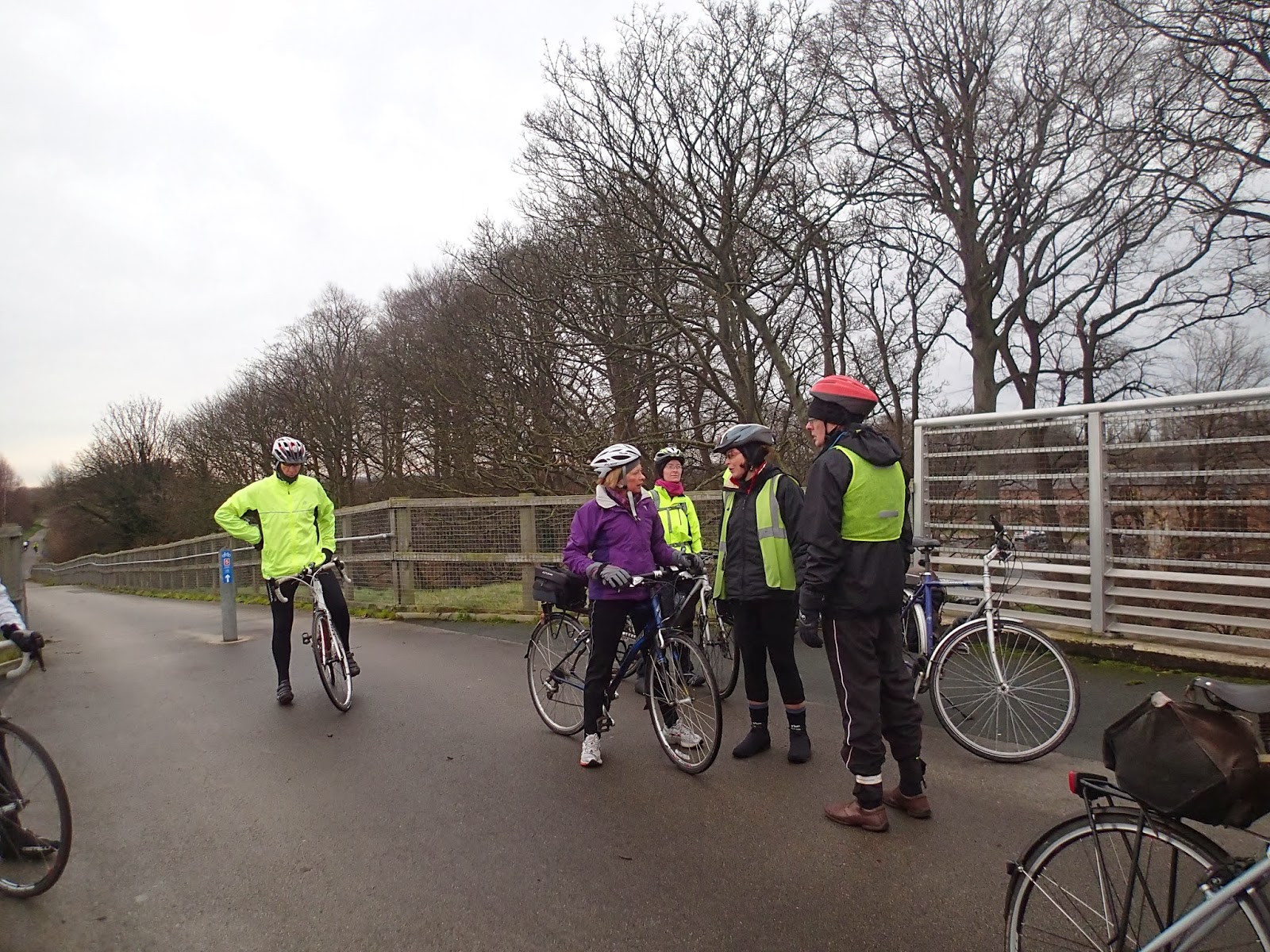 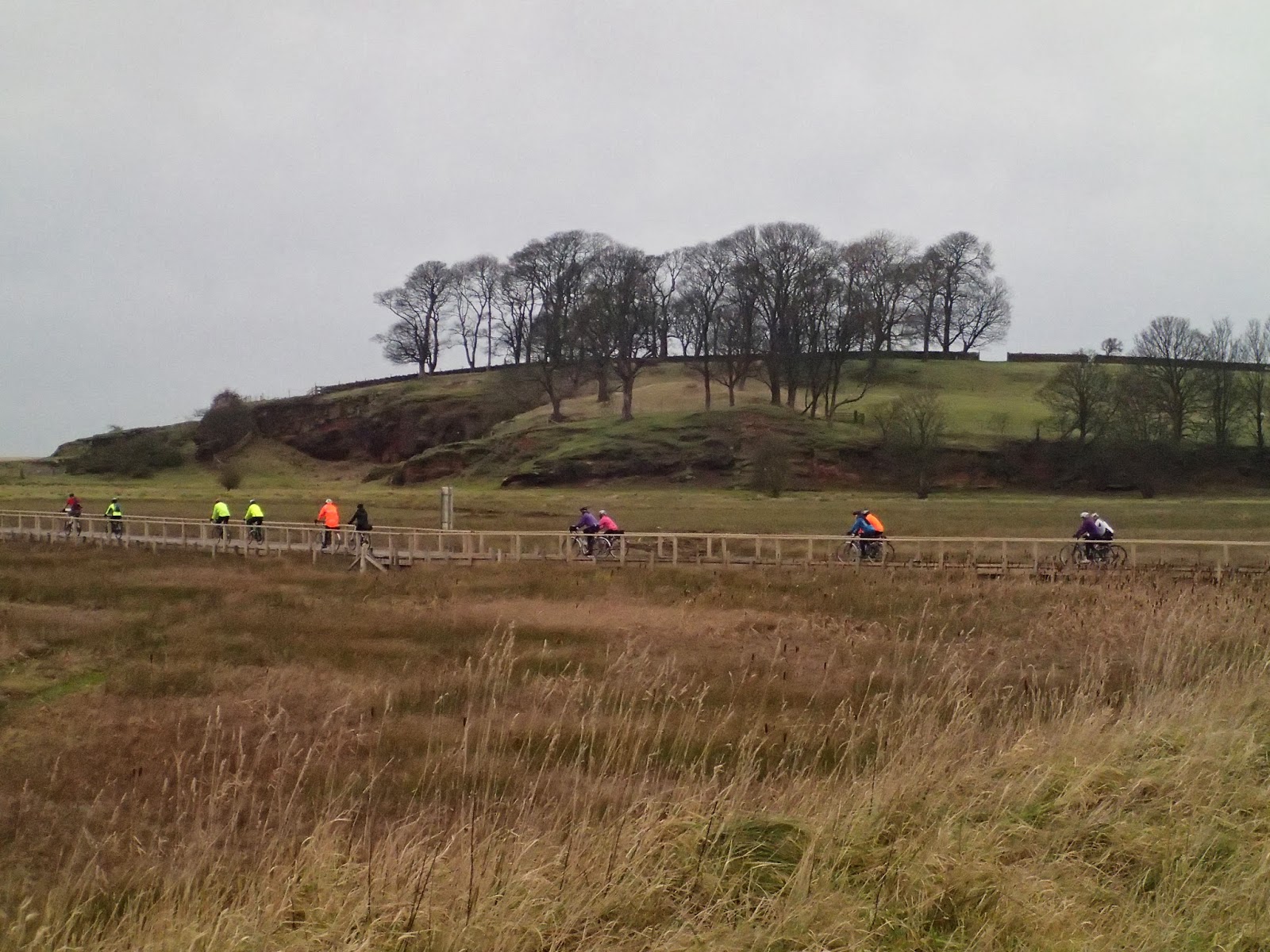 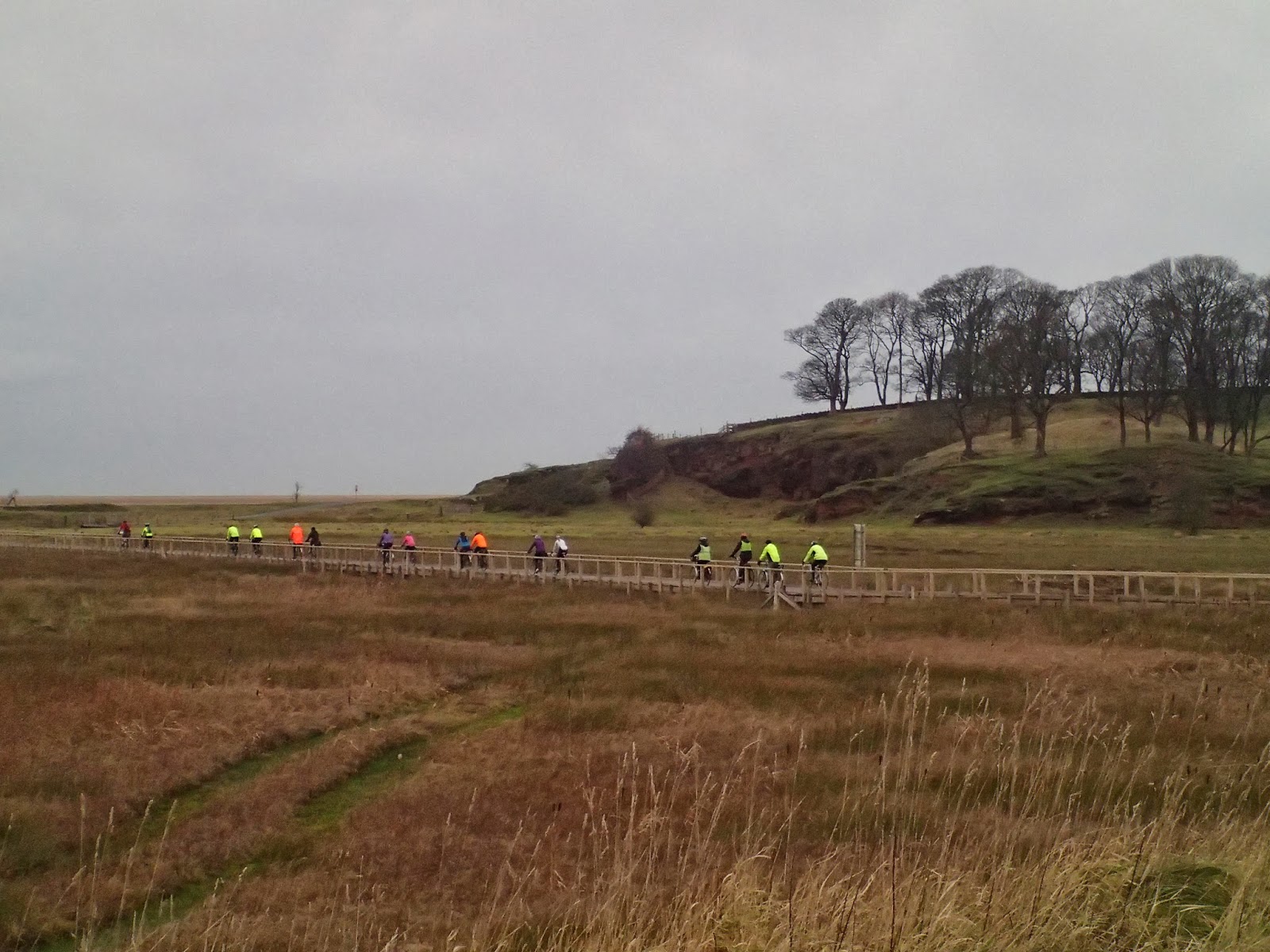 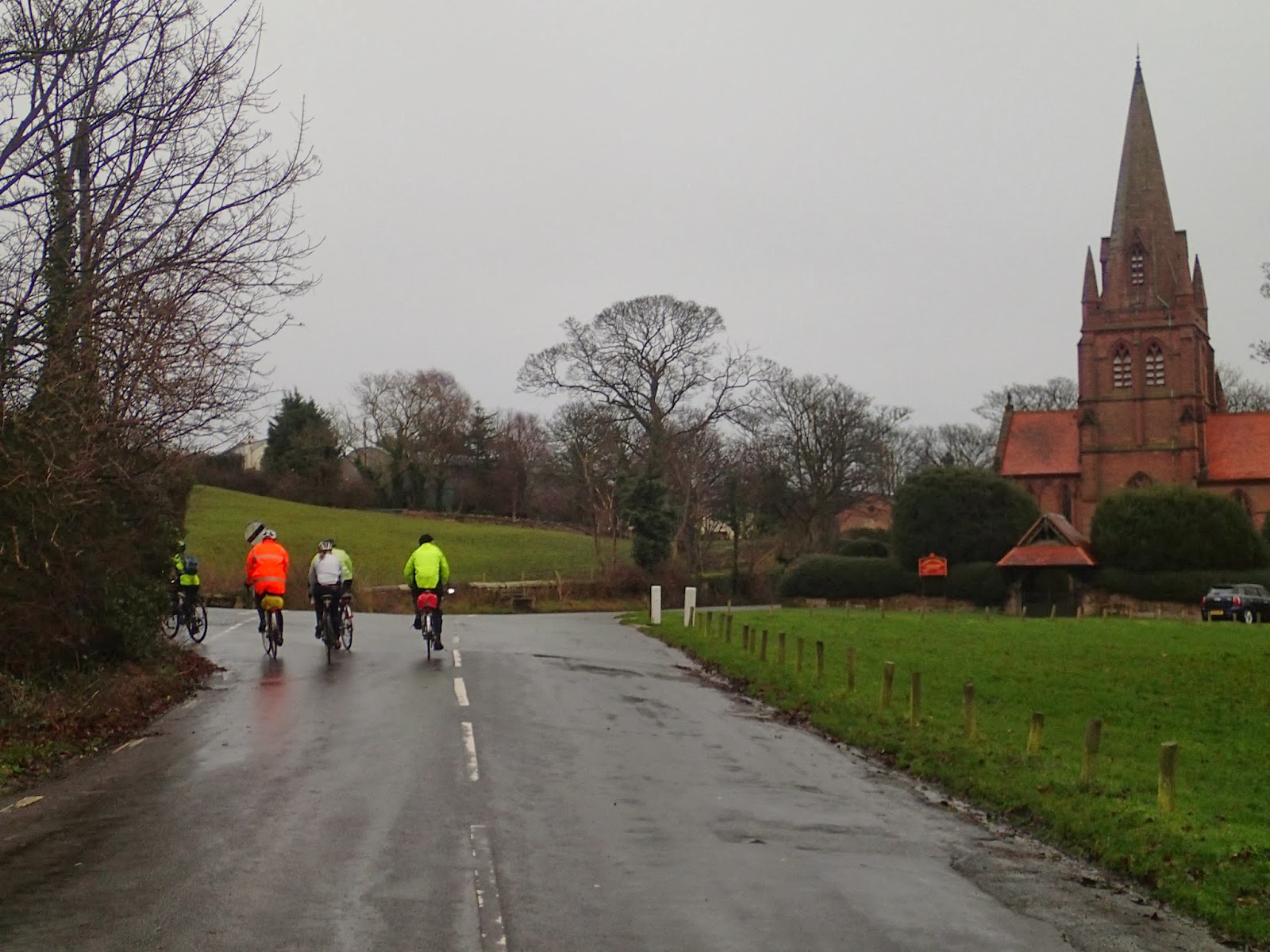 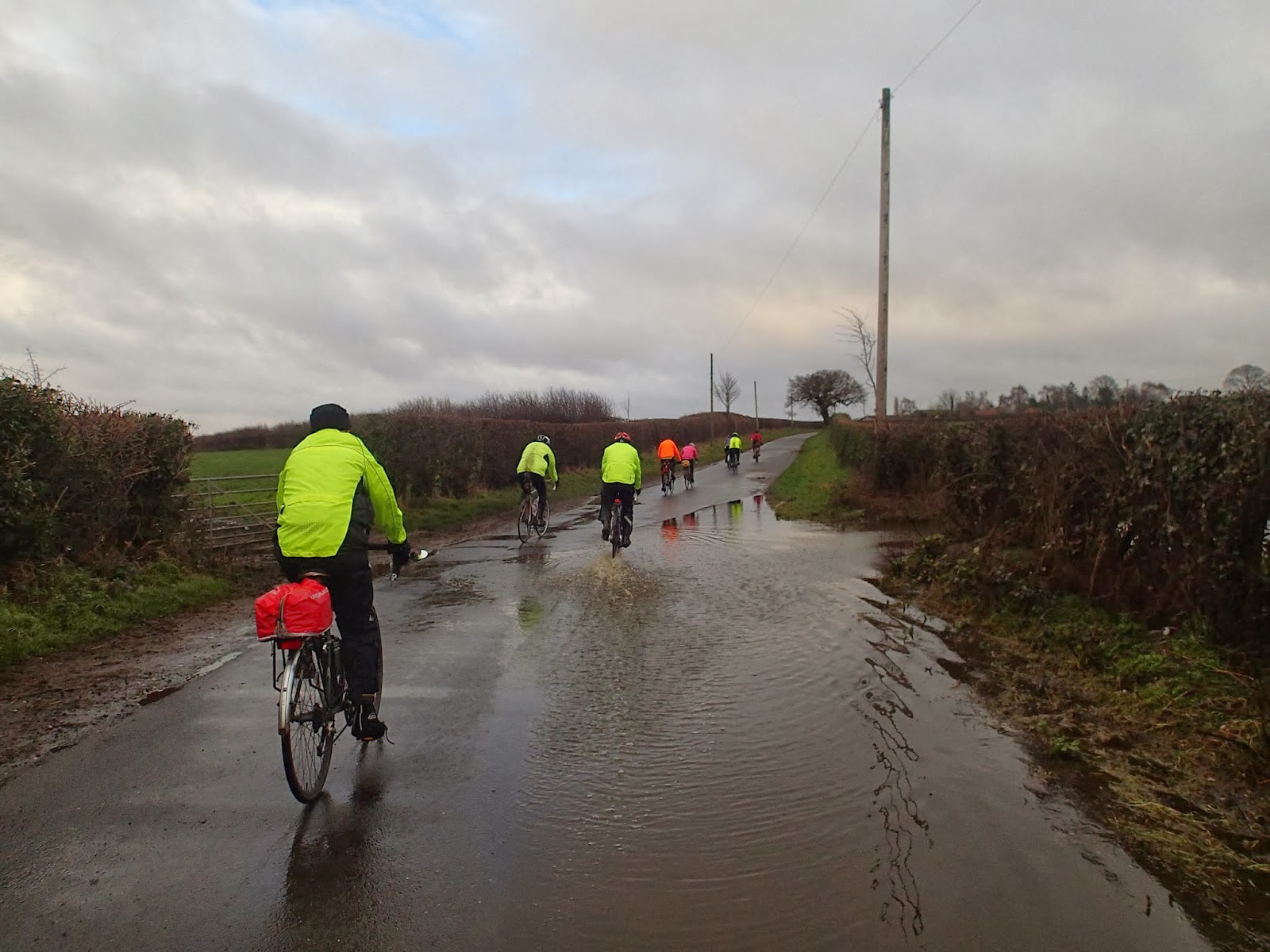 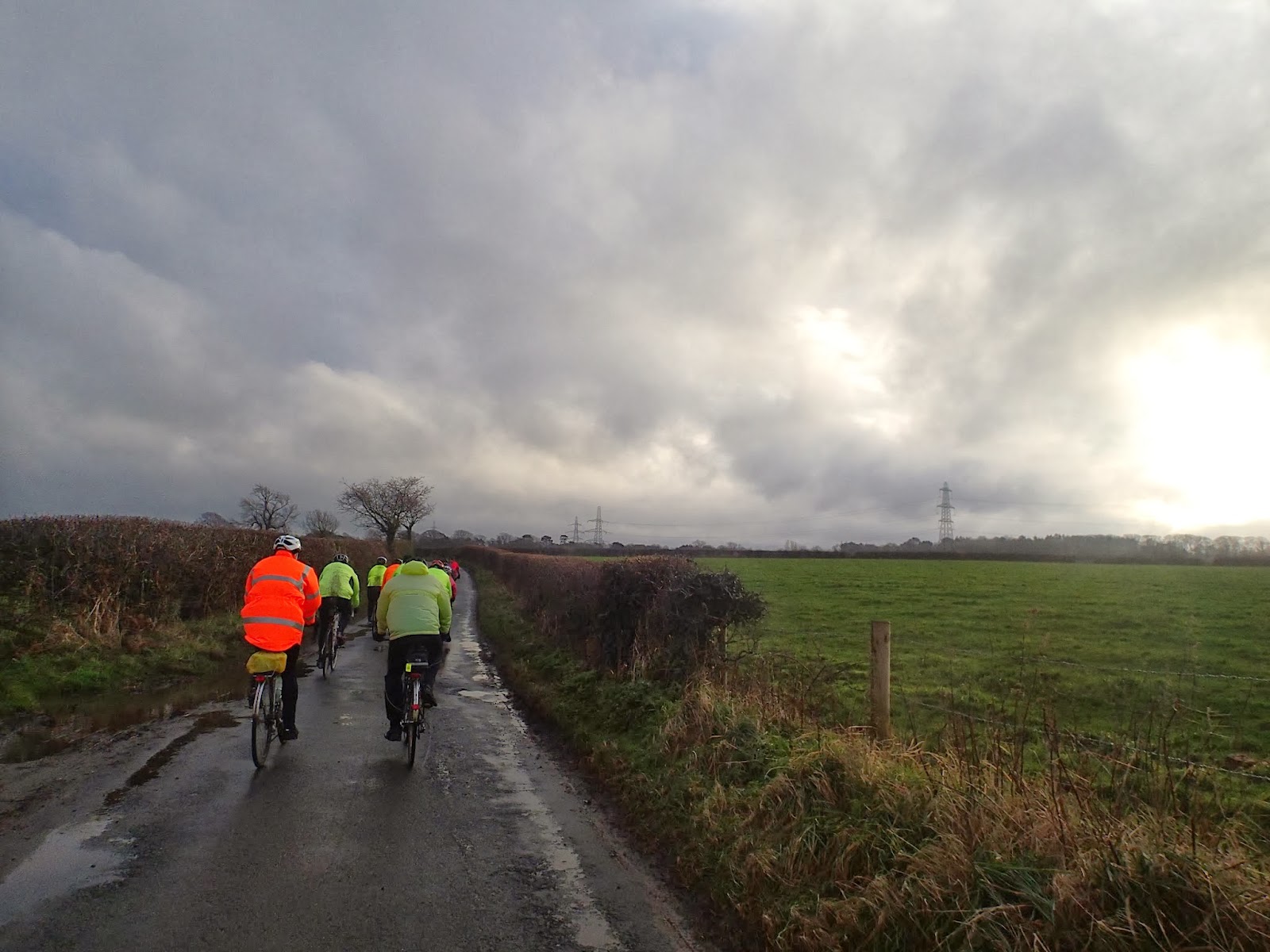 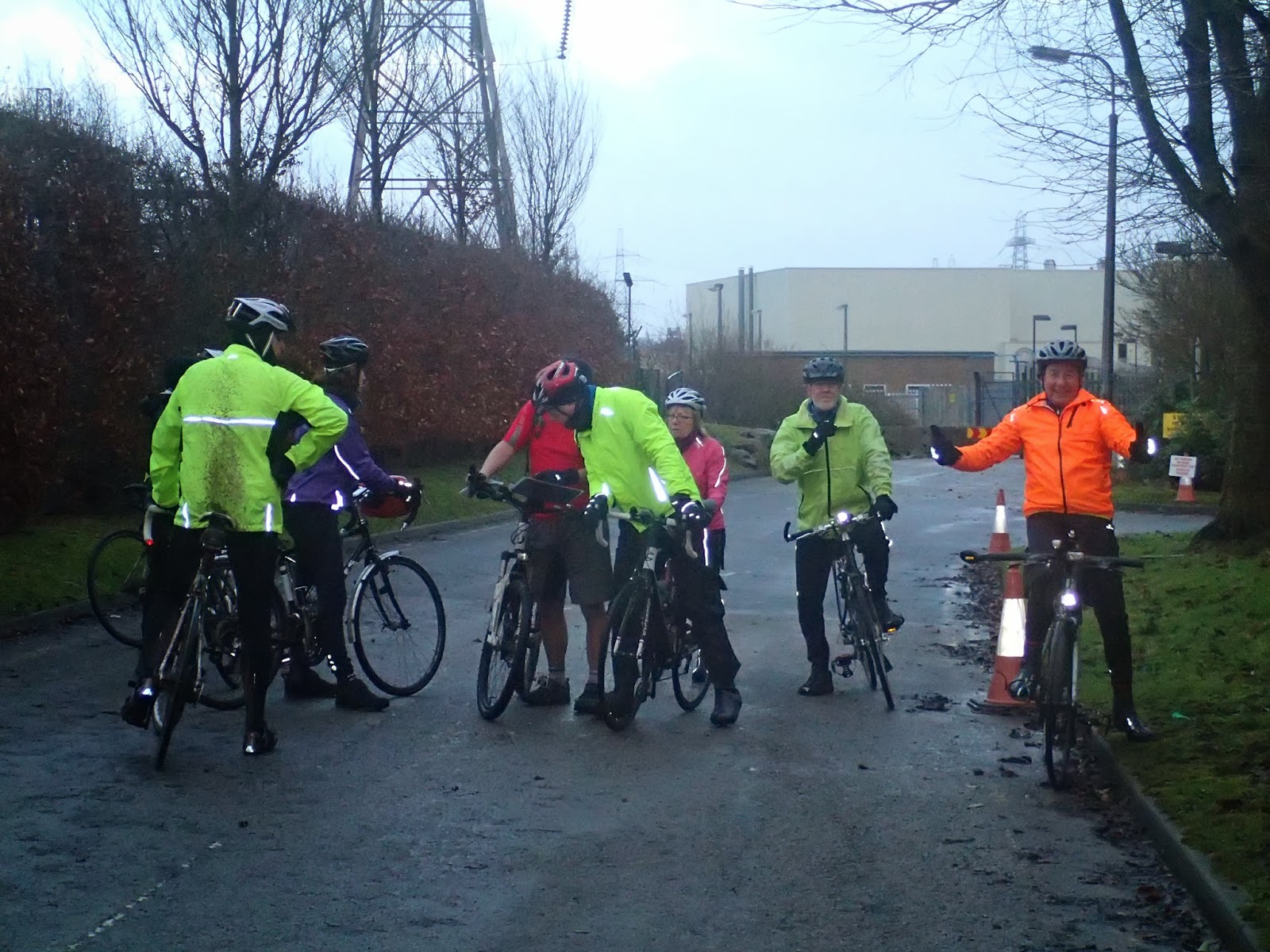 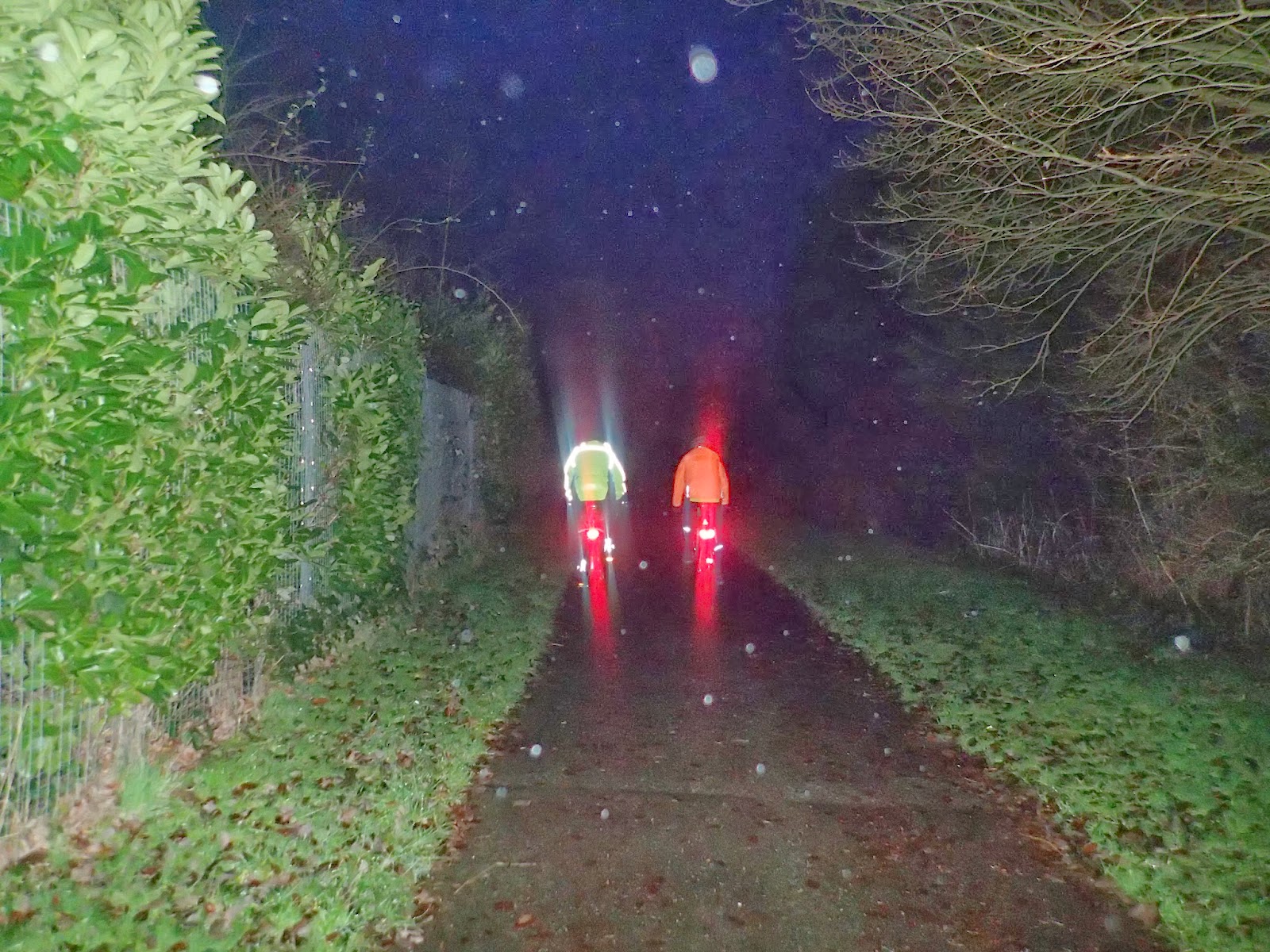 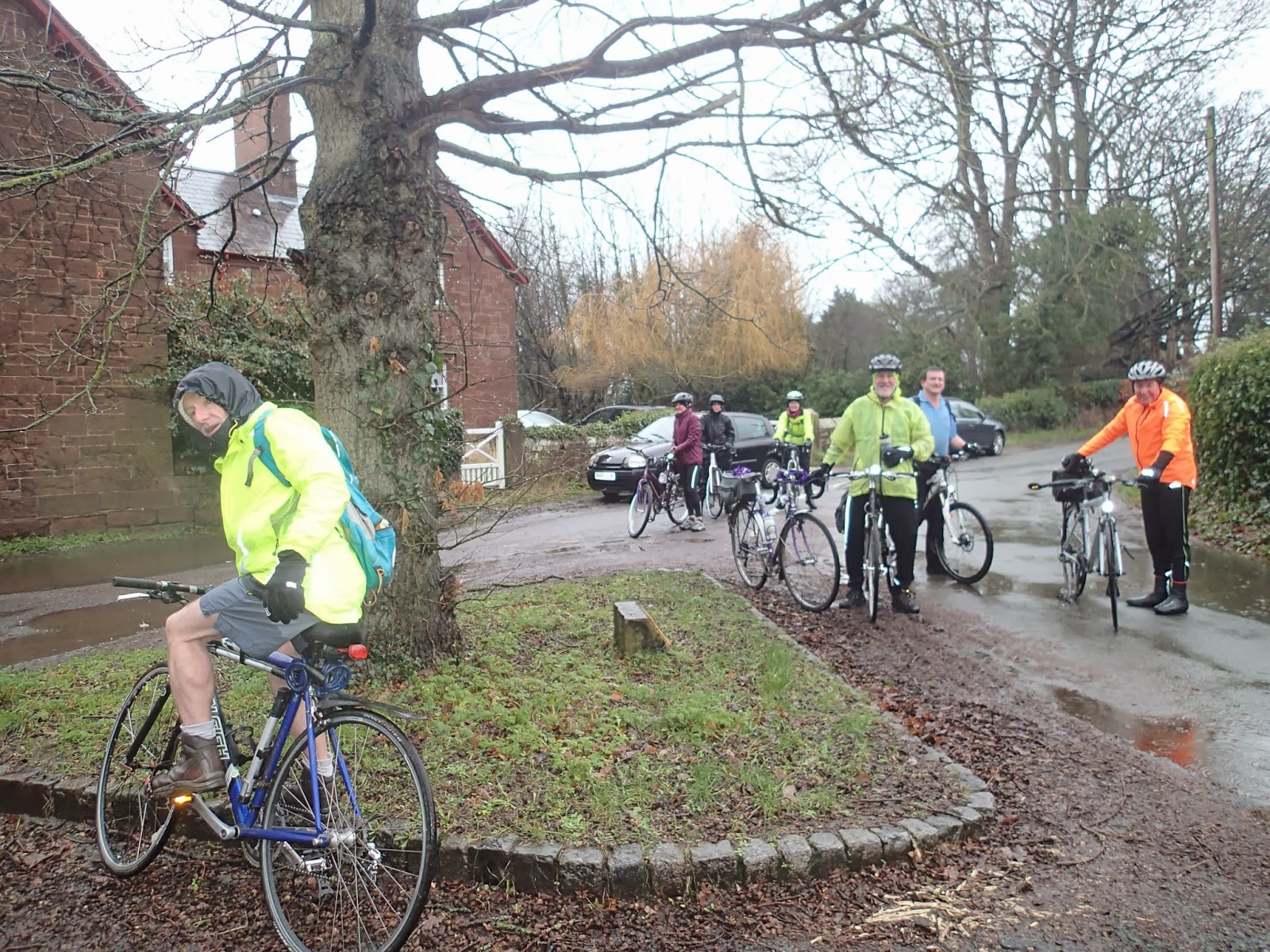 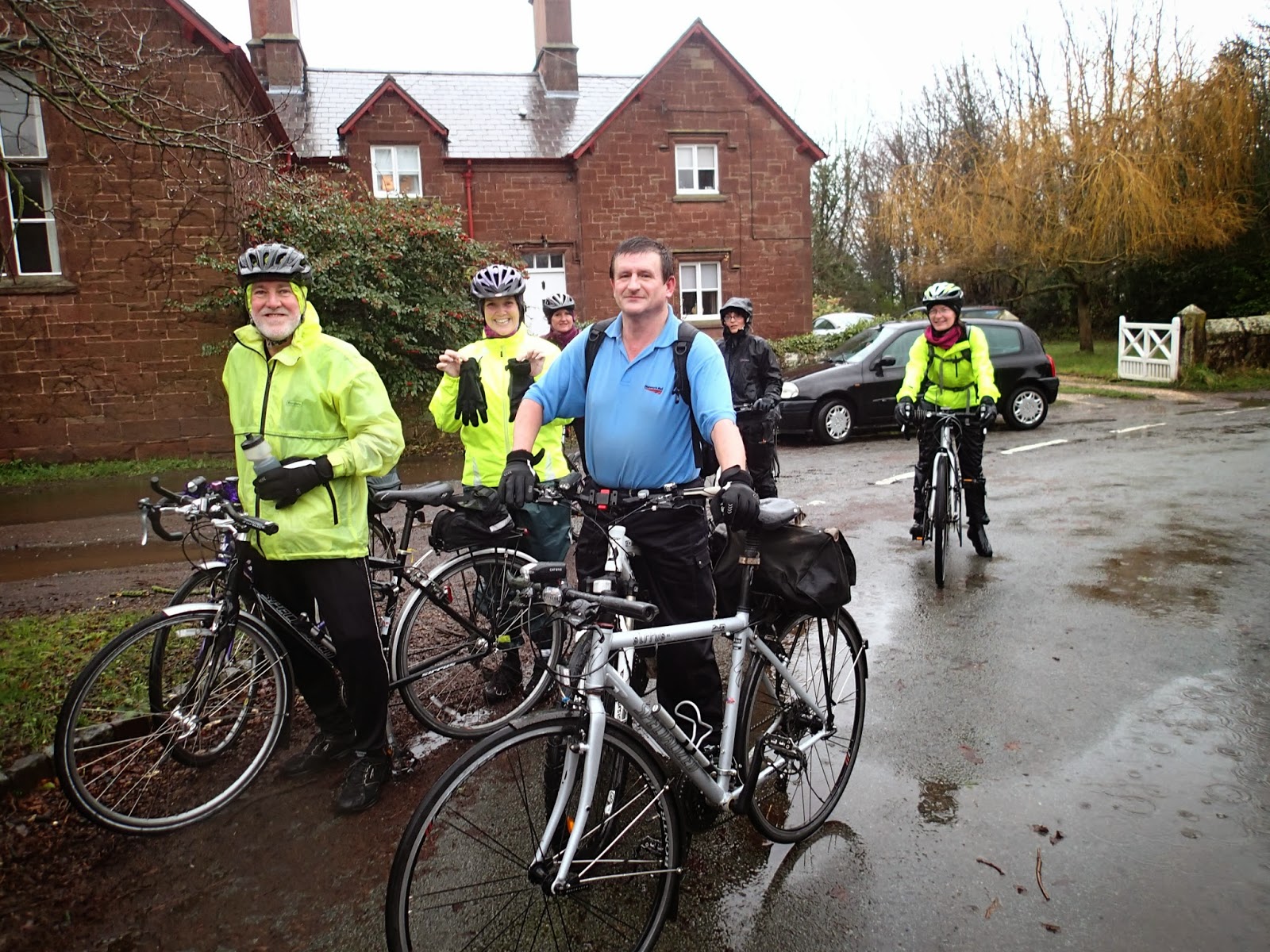 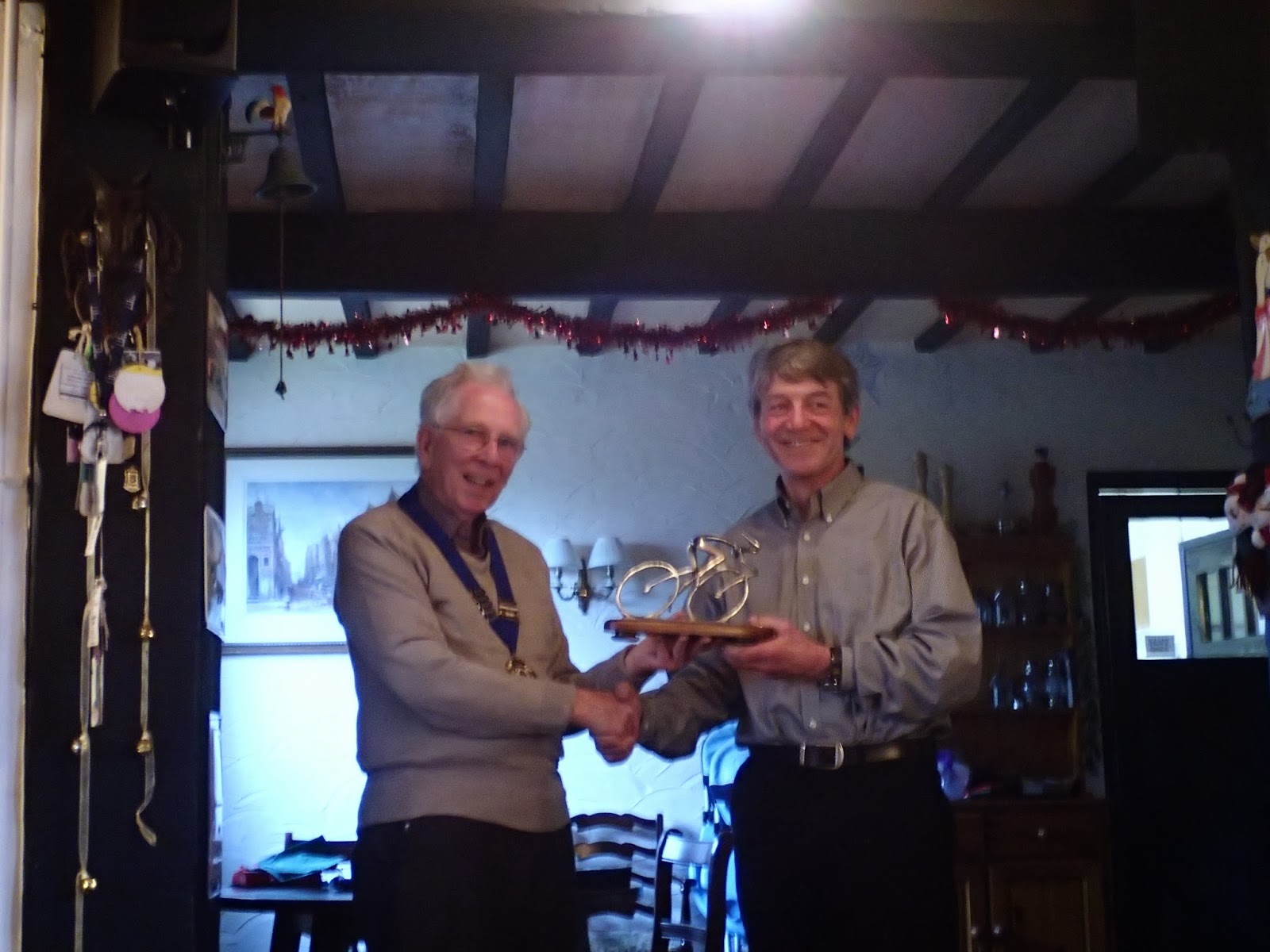