Many CTC groups hold what they call a Vets ride ('veterans, age 50+) for riders, and usually I think they are 100 miles (in 12 hours).  For many years our (Chester & North Wales) event ran from Kinnerton to Llynclys, before it moved for various reasons to its current location at Bickerton.

Last year Stu led an informal ride following the old route, and it was popular enough to make it to the rides list this year.  Here is his account, with photos by Ray.


"The weather forecast for Sunday 17th of August was not good, heavy showers and very windy, which is probably why only twelve of us set off at 8.30am from Kinnerton on the old vets 100 route down to Melverley. In truth the weather was not that bad, only two lightish showers all day, the first just this side of Overton on the way out and the second the other side of Ellesmere on the way back, and because the route is quite flat and the lanes reasonably sheltered the wind was not such a problem either, also the wind was a westerly and we were riding mostly north to south and back again which helped as we only had a headwind for short periods when we cycled towards the west.

The route took us through Doddleston, Holt, Shocklach, Overton, and down to Ellesmere for morning coffee at Coco, the cafe with the CTC winged wheel above the door, they are not normally open on Sundays but the proprietor Julie kindly agreed to open specially for us and served up some excellent tea, coffee, bacon butties and cake etc... before we set off once again to ride through Queens Head, West Felton, Llanymynech, Four Crosses and Llandrinio which is where the lunch stop is on the official vets 100 route at the village hall but we carried on another few miles to Crew Green where we stopped at the Fir Tree Inn and had either sausage or fish fingers and chips in a basket with bread and butter enjoyed outside in the sunshine all for three quid a head, can’t help feeling that we wus robbed though as last year it was only £2.50!! 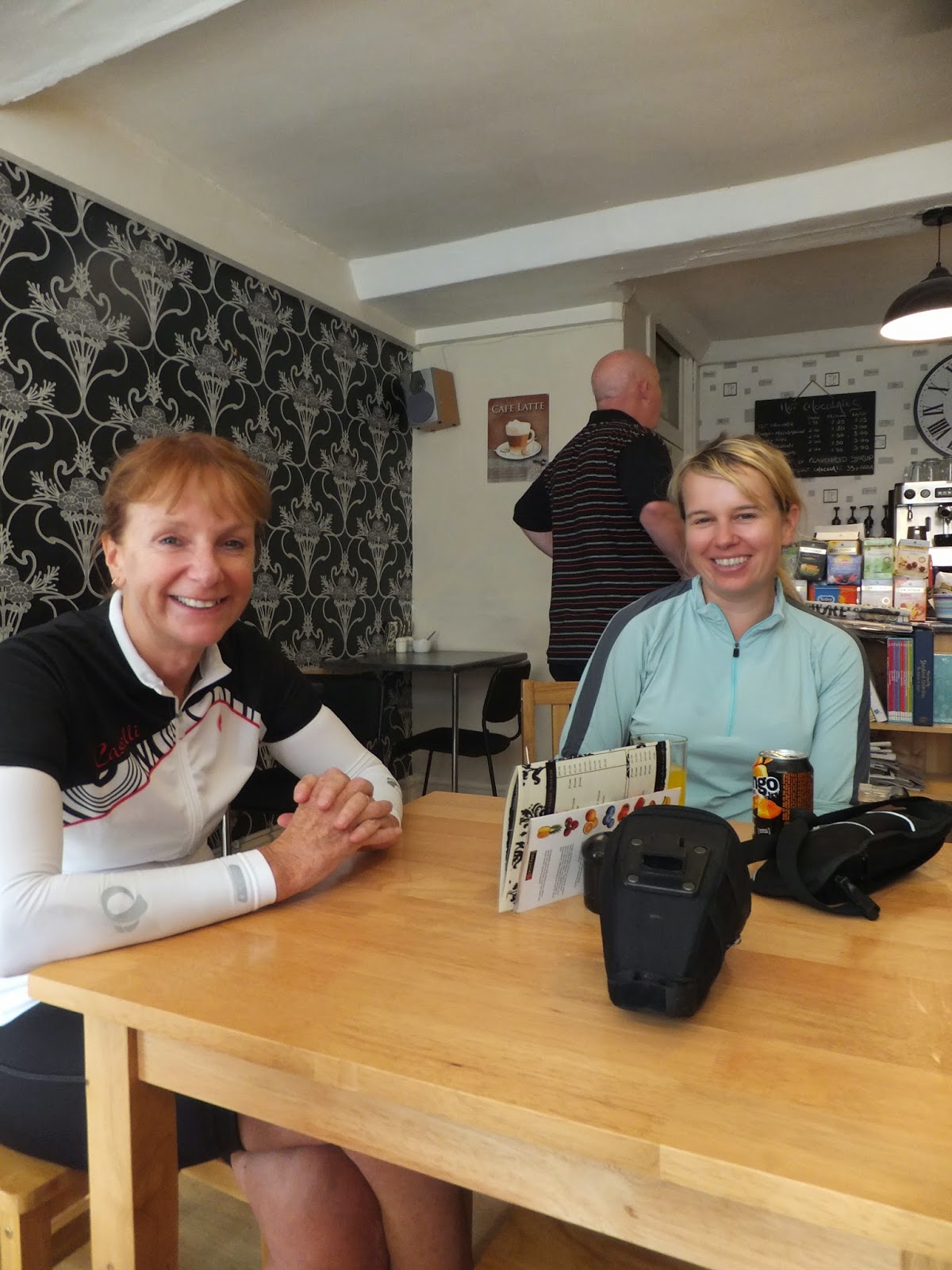 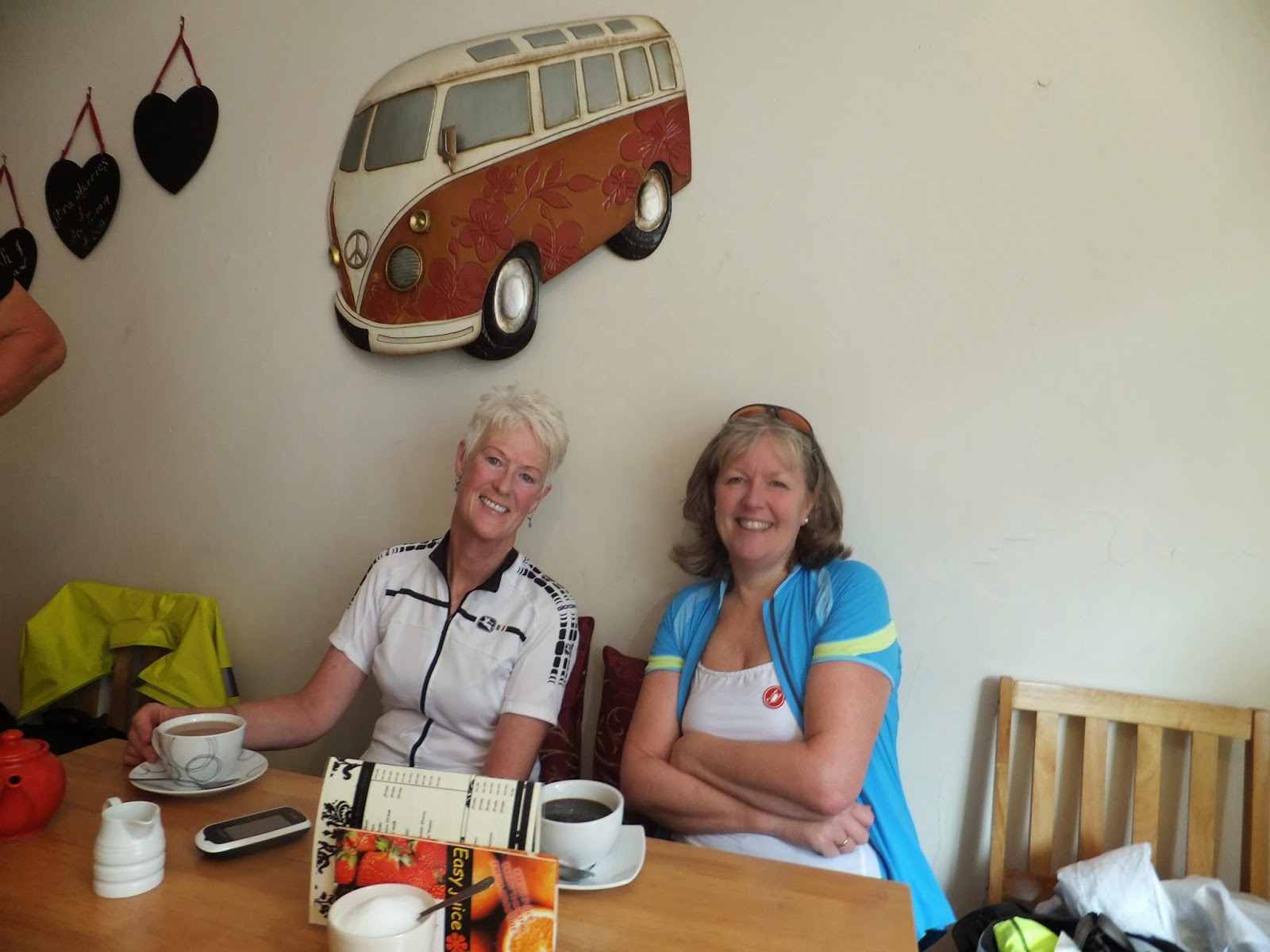 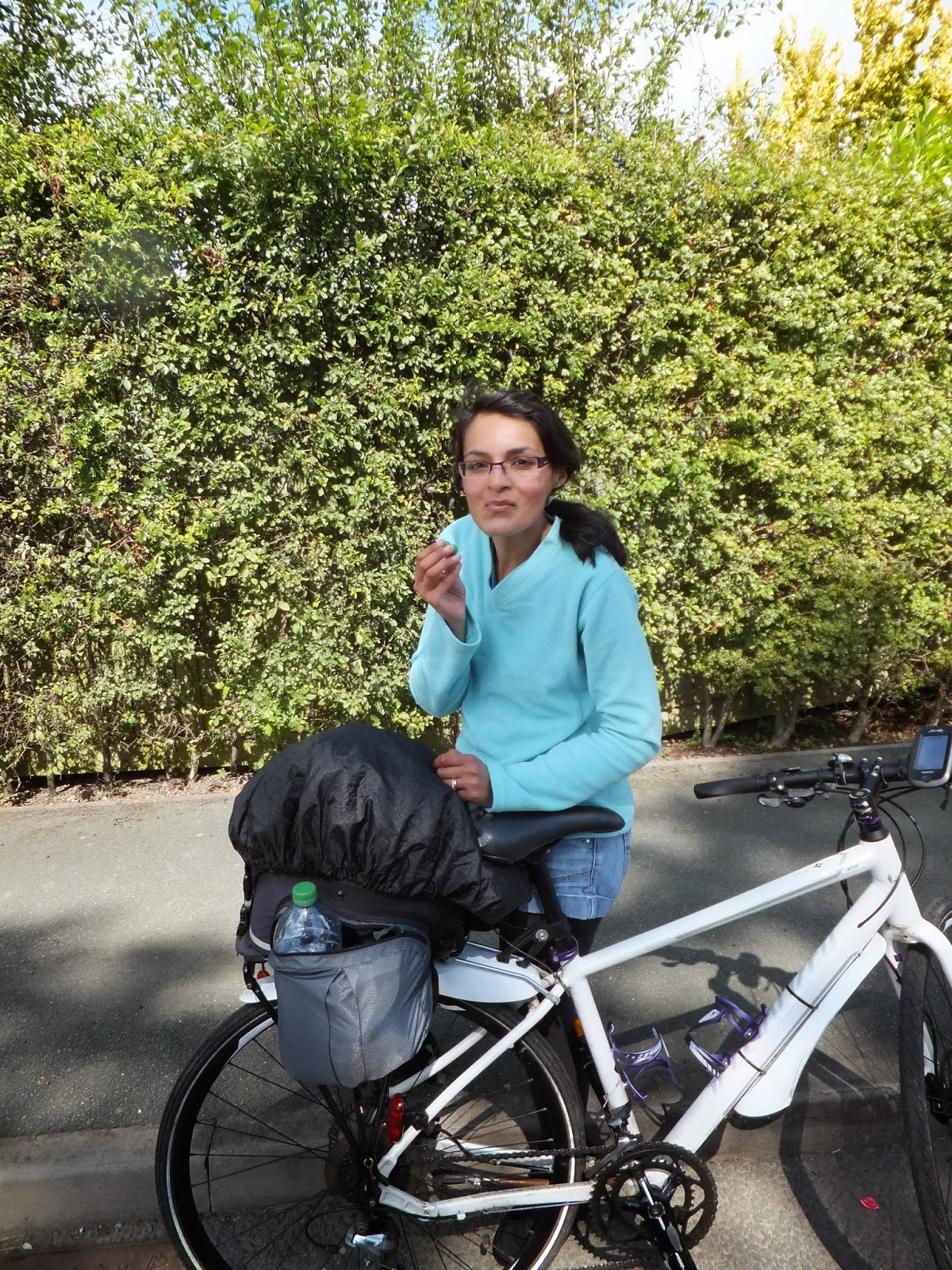 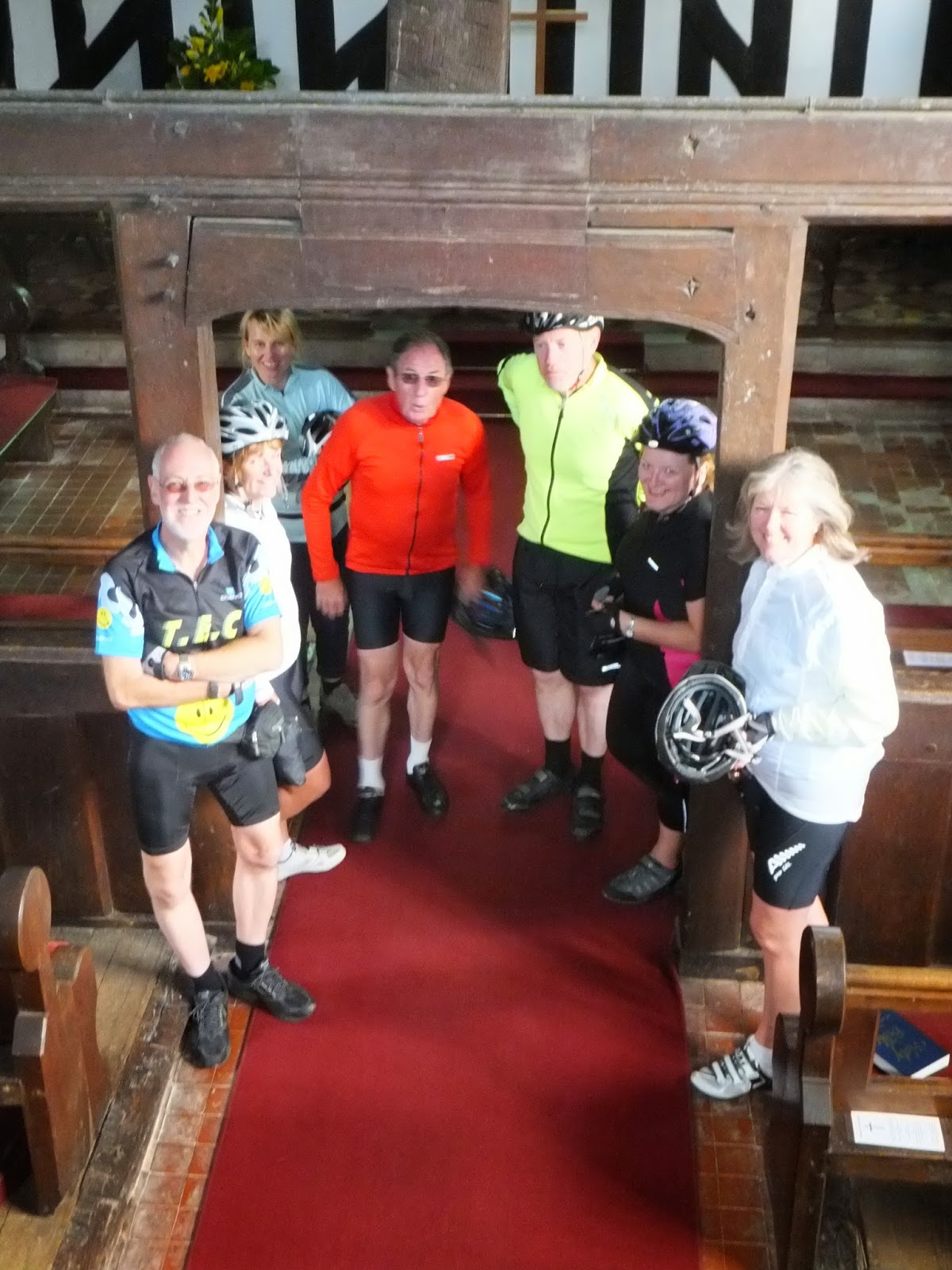 After lunch we crossed the river Severn just below where the river Vyrnwy joins it at Melverley where we stopped to have a look around St Peters church which is an old black and white timber construction dating back around 1000 years, well worth seeing.  Next stop was the village of Knockin but being Sunday afternoon the shop was unfortunately closed as it’s not every ride where you get to visit a church and a Knockin shop on the same day!! 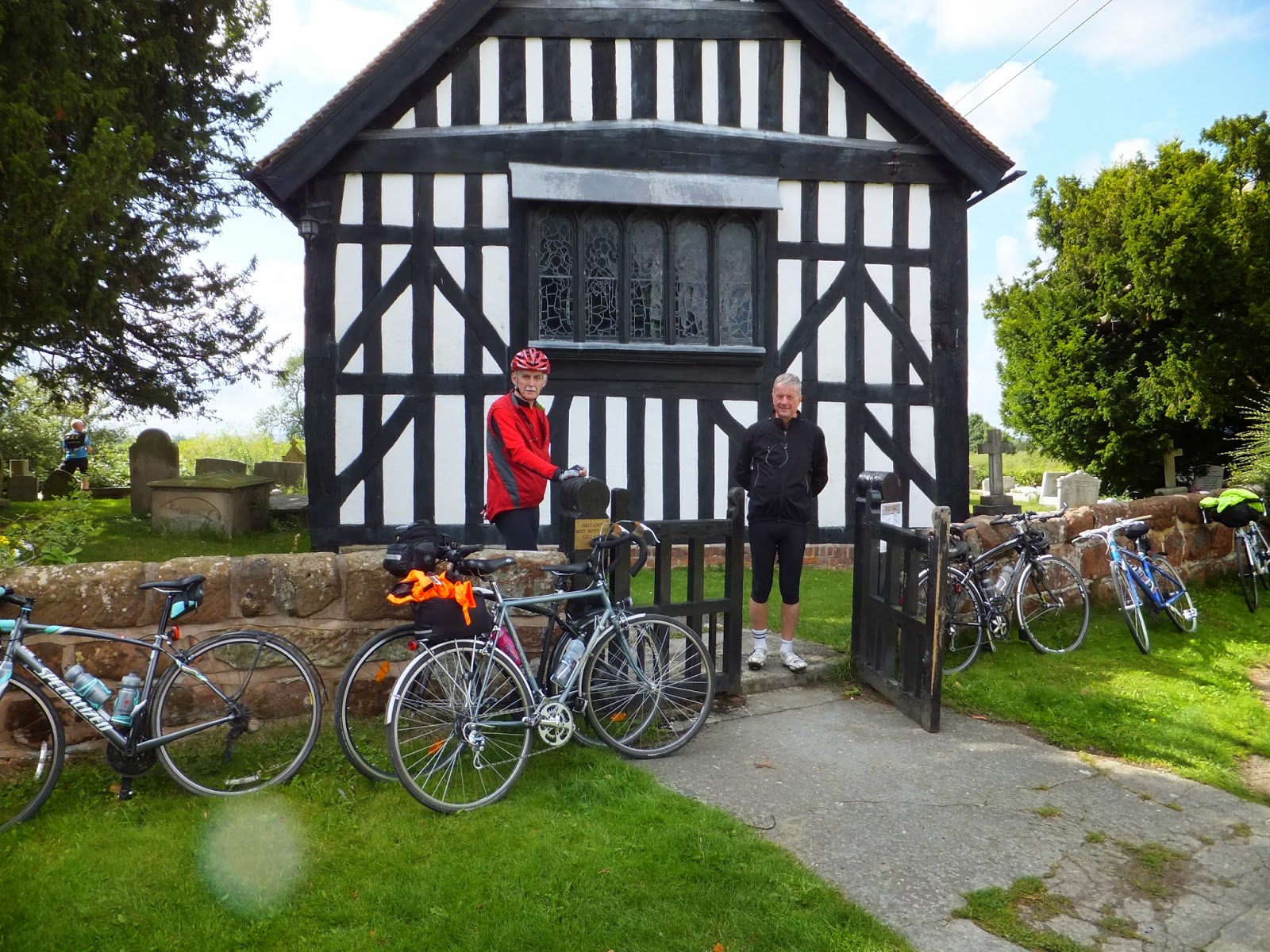 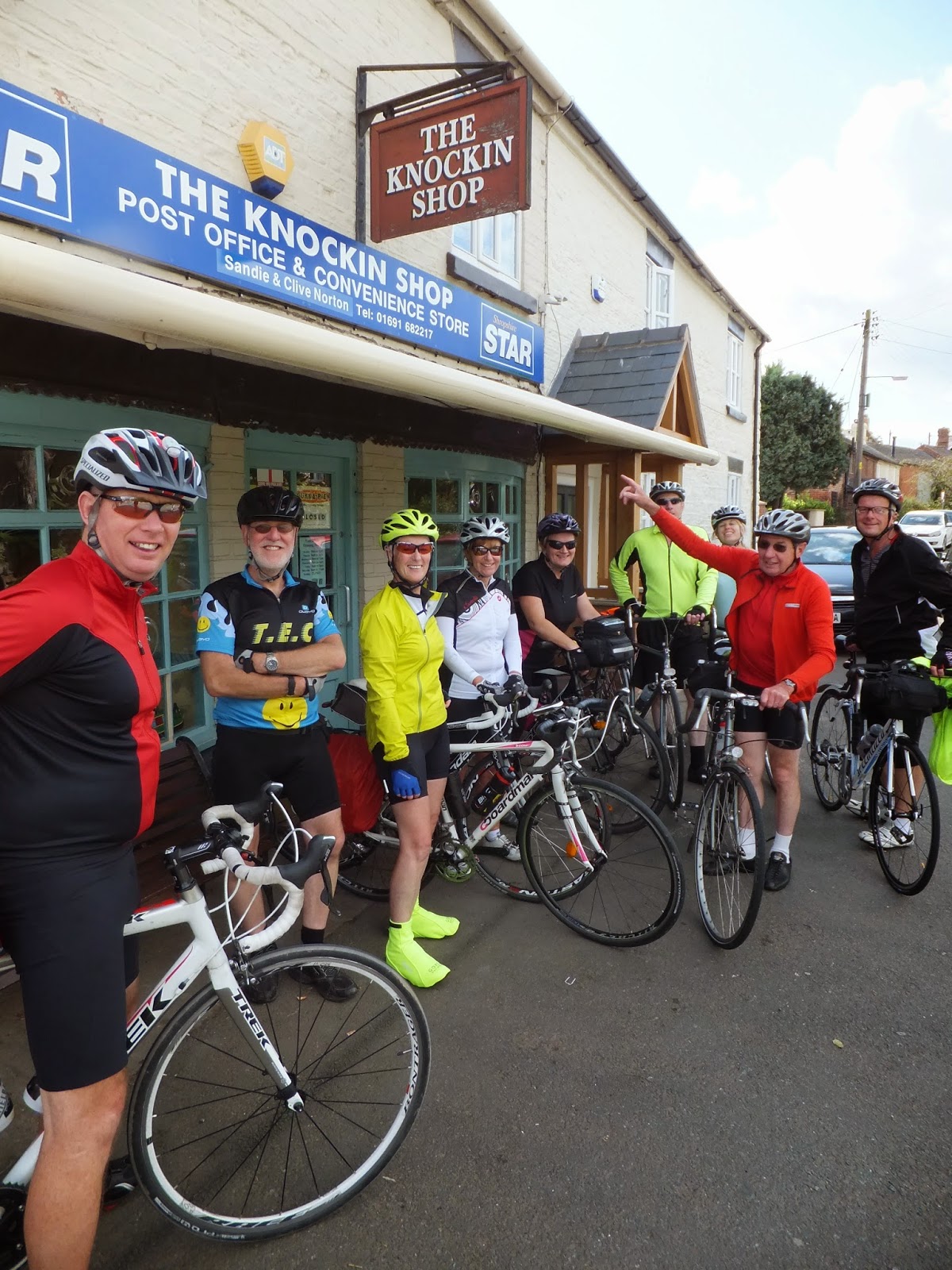 We then came back through West Felton and around the old airfield at Rednal before Ellesmere again then afternoon tea at the White Horse in Overton. The final leg took us back home via Bangor on Dee, Worthenbury, through the back lanes to Tilston then Farndon, Rossett and finally Kinnerton where we all enjoyed a well earned pint or two at the Swan."