The Pheasant at Burwardsley 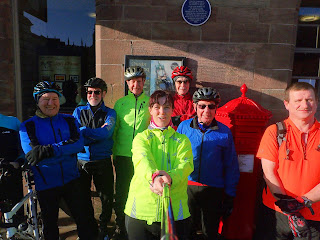 February - bright blue skies and sunshine, despite the odds!

We struggled to take the photo at the start this morning; the sun was so bright and so low.

And then, trying to get everyone to huddle was another challenge - but we got the post box in, so that was nice! (even if not all the riders - there were 11 of us!) 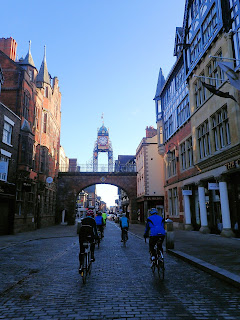 I have lost count how many times I have taken us cycling under the Eastgate clock, but it is so iconic, and with such a blue sky it looks fab! 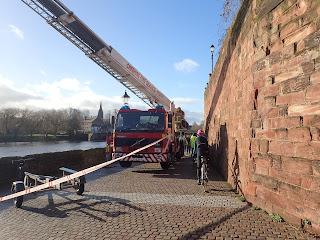 But this was something new - a bit of excitement down by the river.

It looked like the Fire Service were having a practice/ exercise with their boat, lowering it into the Dee.  We were able to squeeze past though

(St Mary's, Handbridge, can be seen left of centre) 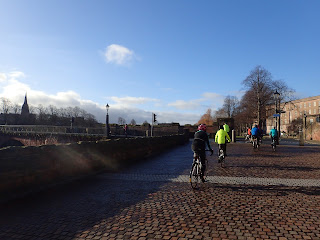 
Fairly unremarkable route to Holt - at one point Nosheen and I drifted off the back of the group, but we saw Stu go round a corner in the lanes in Darland so followed him; secure in the fact Dave must've used the usual back lane...only to come out at the end to see them approach from a different direction!  At least we caught up! 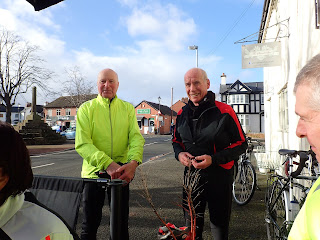 There were many cyclists out on this fine sunny early February morning - we met Welna and Stephen sat outside at Cleopatra's, and we joined them as the cafe was already full of cyclists! Then the Mold Section turned up - both of them! 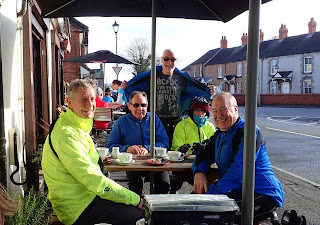 It was chilly sat outside, there is no denying that! 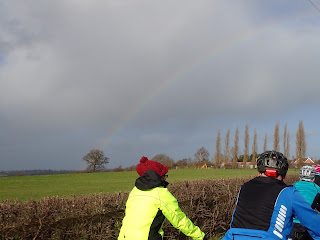 As we left Farndon, and after negotiating Wetrains lane, the sky darkened.  We luckily somehow did not have a downpour, but did get to enjoy a rainbow fully circled over our heads. 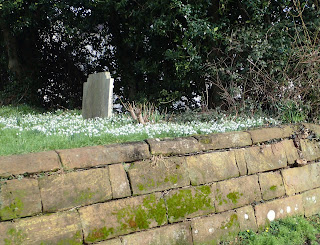 Approaching Cuddington I certainly wanted my camera out, as I recalled a ride about a year ago, and noticed how many snowdrops there are in the church graveyard.  Not disappointed (but harder to capture than I thought as we passed by!) 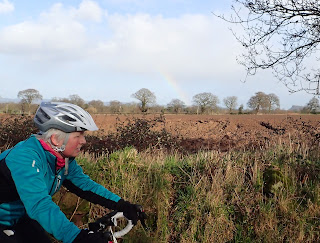 We dropped down to nearly Tattenhall, before climbing back up towards Harthill (but not all the way) - and another rainbow could be spied off to our left. 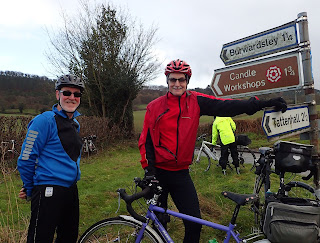 We all arrived safely to The Pheasant - but unfortunately one of the party became unwell, we needed to call an ambulance and it stalled the day somewhat.  Fortunately our rider recovered, although did spend a night in hospital.


I think we had had the best bit of the day, weatherwise certainly.  A pleasant and manageable route for early February, with some lovely views from the pub (can't really be captured on camera).  Thanks to Dave for leading, Ray for popping back home to get his car and take the spare bike home, and the wonderful staff at the pub (Eve) for sitting with us until the boys in green arrived.

NB If you are going to call an ambulance, make sure you have the postcode of your location - and try to make it to the pub before you become poorly!
Posted by Purple Sue at 17:00