"(Growing old, is for old people)

The day started as per usual at The Piper for a pre ride drink, in brilliant sunshine. Sue came along to say “Hello”, in fancy dress dressed from the 1967 flower power era, Bob looked perfectly dressed for a hot sunny day wearing an Hawaiian shirt and straw hat, Norman looked very smart in a tartan waistcoat and a dickie bow to match. Kath wore a perfectly fitted skeleton outfit, Stu arrived dressed up as a Jamaican Rastafarian (a dead ringer for Bob Marley). Dave (shorts Dave) his outfit was great showing his proud Scottish heritage [not too much of it, fortunately - S], all dressed in red tartan wearing a kilt and if he lifts his kilt and shows 2 quarter pounders it proves he is a McDonald and not a Campbell and to finish the look a ginger wig and a tartan beret. The oddest bunch of cyclists assembled in the car park for the “Grand depart”. 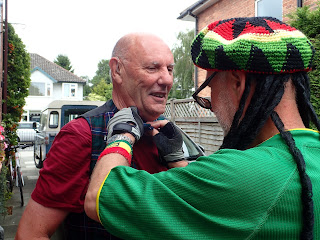 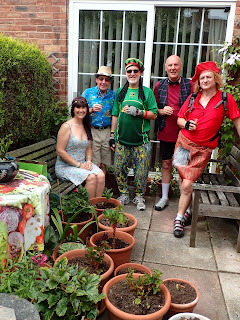 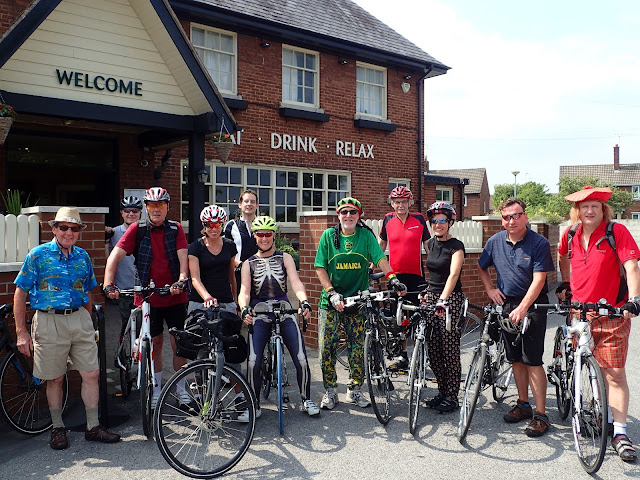 This year we were determined to keep the ride at a leisurely pace so we could all chat away and enjoy the ride. It wasn't many miles in before the first mechanical, I think something fell off Gill’s bike, Bob was furious! He was hoping for something more serious, like a puncture, so he could have had time for a Whisky out of one of our flasks, he had no need to worry because after a couple of miles the group began to split which provided the perfect opportunity to sample the drinks on offer, some of Scotland’s finest malts and Gill Stagg brought along homemade sloe gin. Gail and Steve are relative newcomers to this “Crazy Gang” and sampled the malts with great skill, Steve is in an AA meeting as I write this.

The lovely ride rolled on in the beautiful Cheshire countryside in fantastic weather. We arrived at the Helsby Spice, a couple of beers, great food with lovely company. Carlsberg don't do curry rides, but if they did, they would have done this one, because we knew we were in for some rain but that happened while we were sat inside the Restaurant comfortably dry and warm [Oh, well done! - S].

Curry finished, all happy, we set off to our next destination, The Shrewsbury Arms, we sat outside around a big table and enjoyed a drink and jovial conversation. After the Shrewsbury we were then on the homeward stretch back to Chester.

Conclusion
After a successful curry ride, Gail getting beat up the hills, yet again, by Gill (thanks to Dave’s coaching) We all hope Stu recovers quickly and gets back on his bike sooner rather than later. Thanks all for a truly great day and fantastic company."
Posted by Purple Sue at 16:03