The Lord Combermere at Audlem 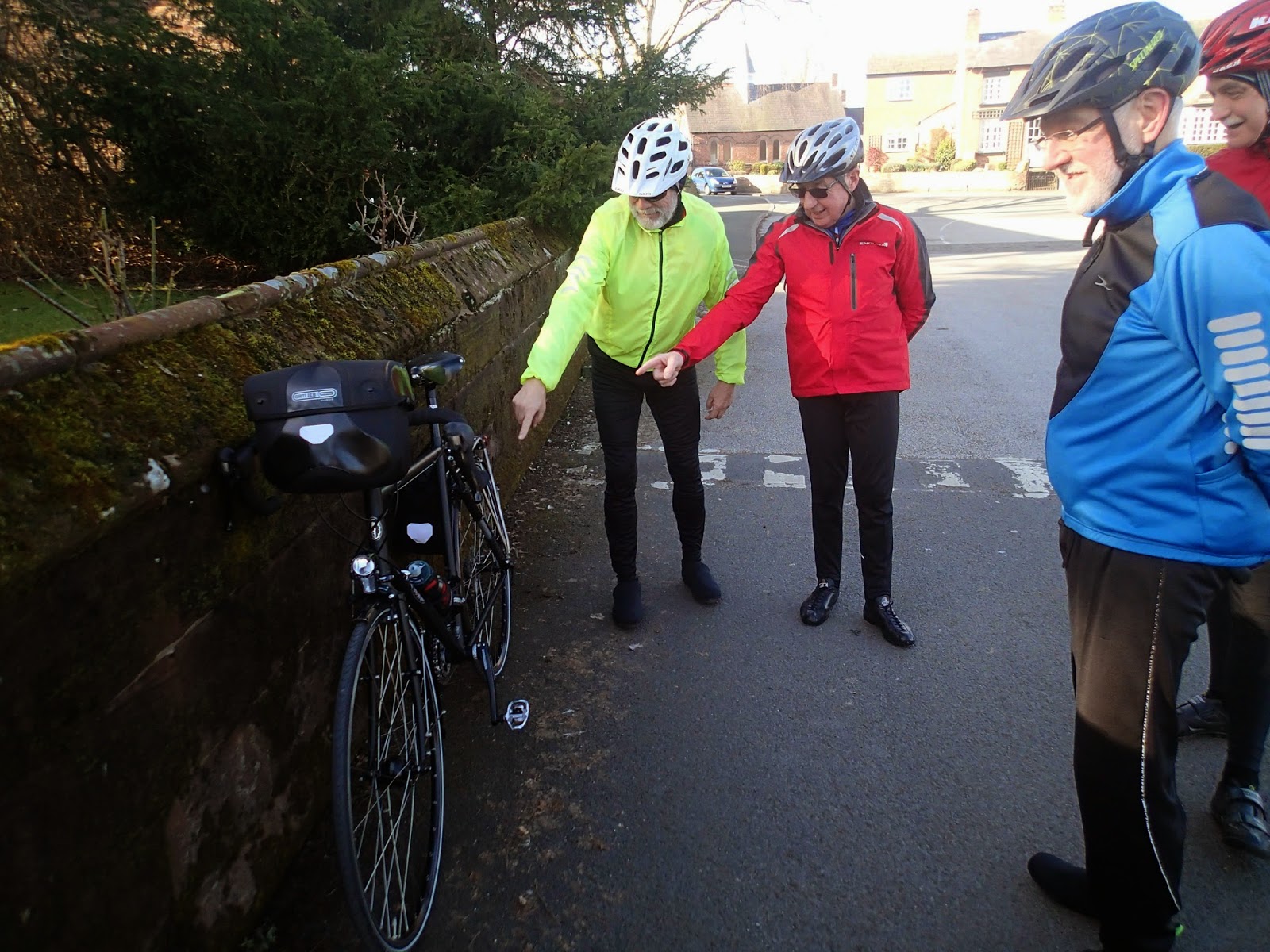 Meeting at the pond, as that was the direction we were heading, the first order of the day was to admire Ray's new bike, with much pointing and oooh-ing.  9 of us left the pond, but numbers were going to get complicated today as some were leaving at coffee, and others were joining at coffee stop... 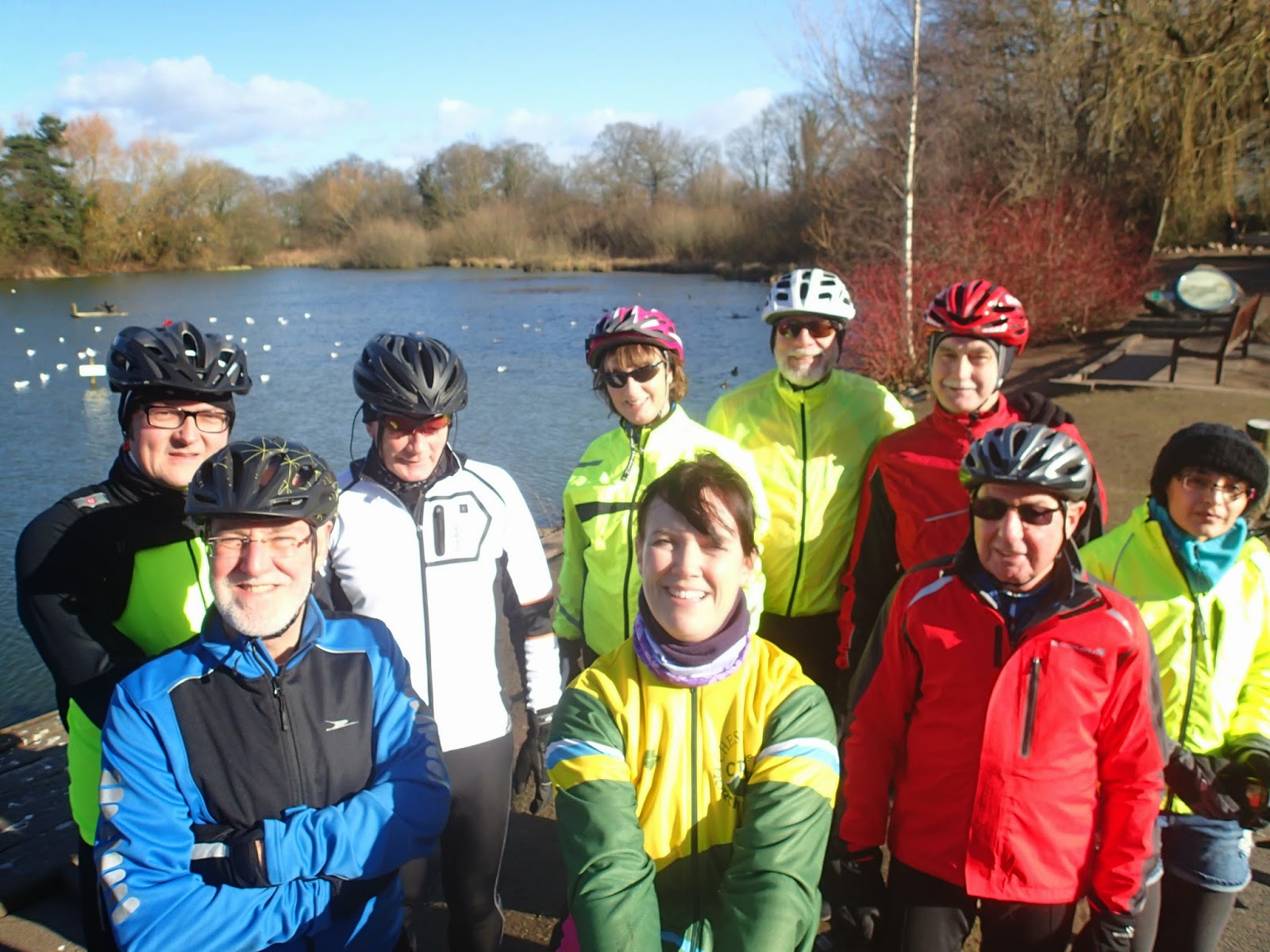 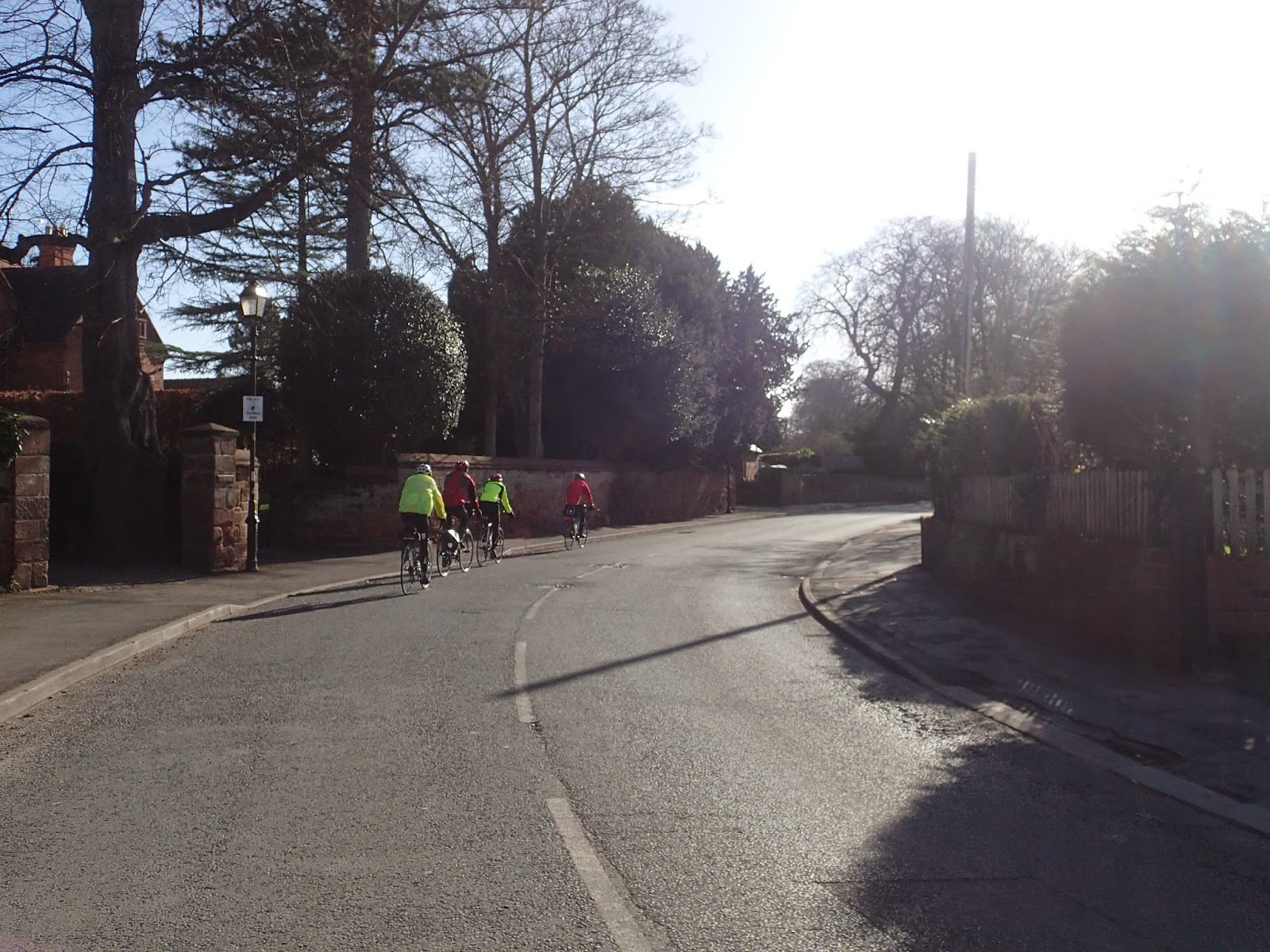 We set off through the village of Christleton, with the church bells pealing as we went.  A usual straightforward route through Waverton, Huxley and finally to Tiverton before dropping down to the Lockgate Cafe, a first for some in the group, and an old favourite for others. 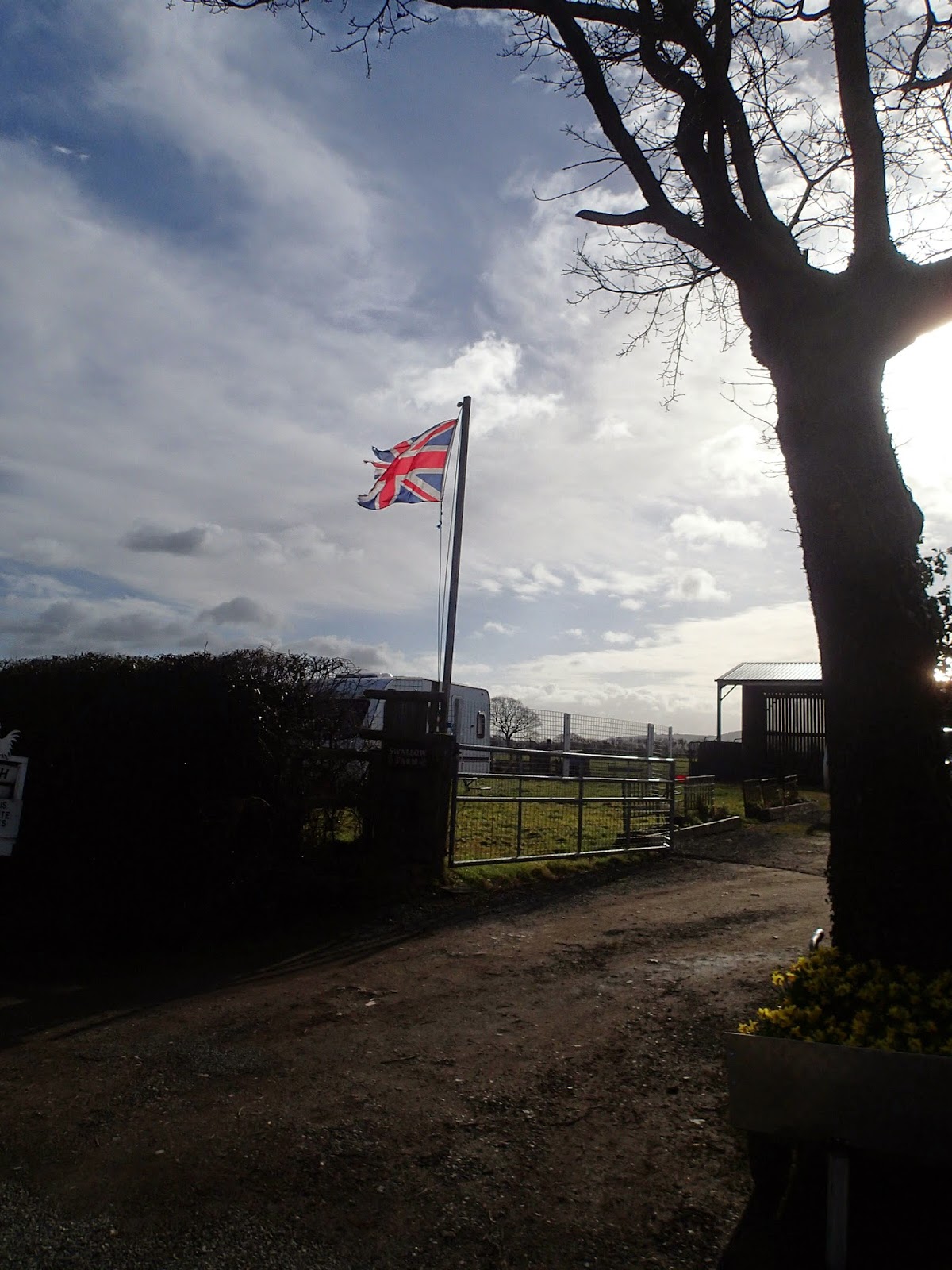 Despite the sunny weather, it was quite windy, although having it behind you for the start of the day is very deceiving - and with no leaves on the trees it is even harder to see the wind direction.  This flag does show it though!

I am afraid I had to leave the group, setting off into the headwind for Beeston, so I will wait for someone to fill in the gaps - I believe it involves crackling and sheltering from the hail......


Small, but amiable bunch set off for the Lord Combermere at Audlem. Uneventful journey through Bunbury etc interrupted only by an enforced stop not far short of Audlem to don waterproofs in a sharp shower. 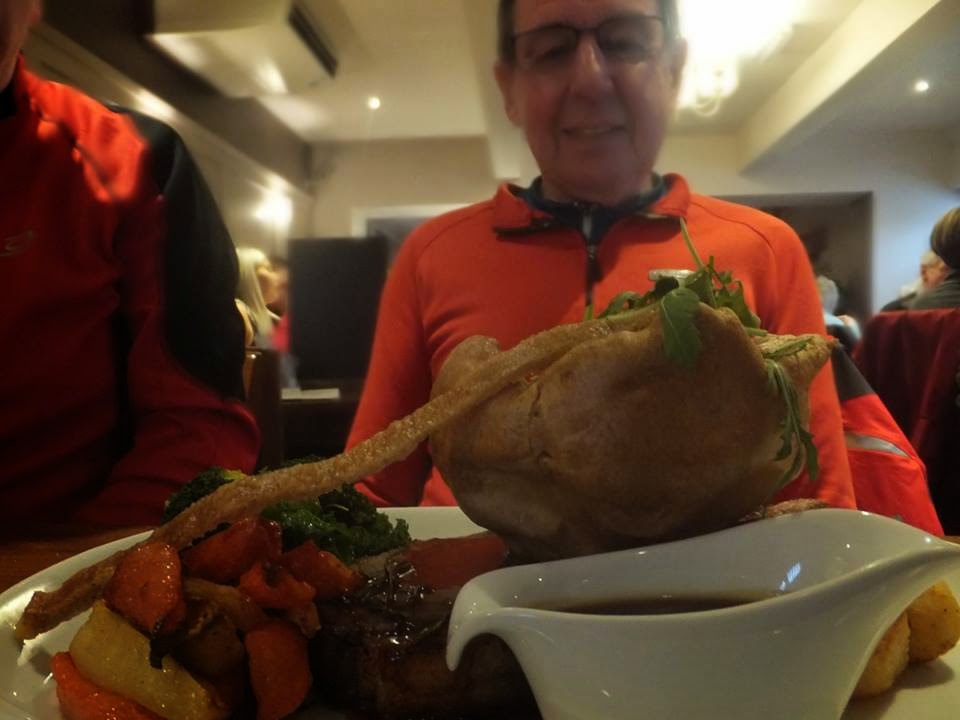 Seven hardy souls took their places at a table in the very warm and pleasant surroundings of the Lord Combermere and there enjoyed the food with only a few very minor issues. The pub was certainly popular on such a windy and wet day.

Progress resumed in the still windy, but not rainy conditions, and on the whole the hedgerows were most welcoming windbreaks.
It was quickly realised that any chance of reaching the Teddy Bear Cafe at Burwardsley was gone so the route was amended to cut out that section. After passing Faddiley and joining the A49 the group was hit by a sudden and strong hailstorm. This felt much like what I imagine sandblasting the face would feel like, and shelter was sought by Skip Brown Cars at Ridley.
The decision was made to make a direct a route back as possible and this involved a short section of the main A49. The cyclist versus motorist issues were once again brought into the spotlight as a range Rover driver saw fit to blindly try and overtake, only to be forced to brake hard in the face of an oncoming car.
Back on minor roads we headed past Beeston Castle in the general direction of Tattenhall and decided to chance our luck at the Ice Cream Farm which still appeared quite busy. Unfortunately we were just a bit too late so pressed on.
Due to riders dropping off at various points on the route back,  three remained as we reached Christleton. The only issue I had was wet feet that were becoming increasingly cold.
It may have been wet, windy and occasionaly more than that, but an hour after arriving home there is immense satisfaction with the days outing and a hot bath is true bliss.
The route Christleton and back amounted to 58.54 miles at an average speed of 12mph and an ascending altitude of 2,493 feet.

Yep, you’re right we did need to stop for waterproofs a mile or so from Audlem. The food was quite exciting as it was presented very well although not quite VFM as I traditionally like, (Value For Money).  It wasn’t raining on our leaving Audlem and the sky was blue for a while until near Beeston at 16:15 when it got nasty for a while but the skies cleared again for my solo effort returning past tarpaulin [Tarporley!] but I arrived home a bit soggy  and cold. It was a marginal day of pleasure as the amount of really cold rain and water on the roads was a little testing of one’s mettle.

Until next time but it was worth it as there are many pleasures to be revisited [ie Cheshire villages we are so used to] which were noted on the way and with Irelands superiority on the field it was just as well to go about some other distraction to make the time worthwhile.
Posted by Purple Sue at 20:30