The Lodge on Lark Lane, Liverpool

Roll up for the magical mystery tour...

After seeing the weather forecast for Sundays magical mystery tour I half expected to be on my own at the station; but Ray was already there and we were soon joined by eight other hardy souls. 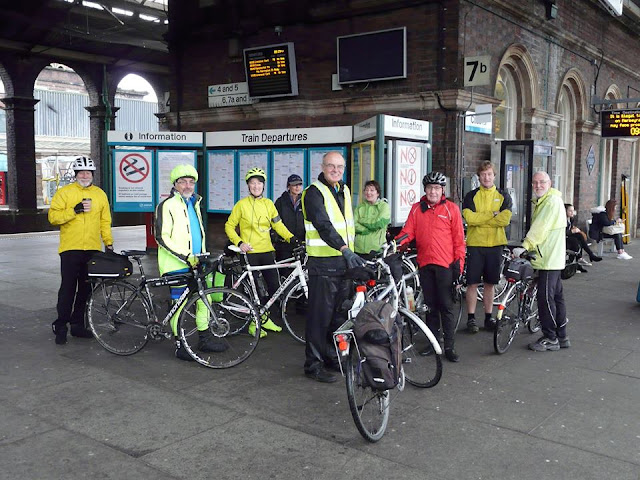 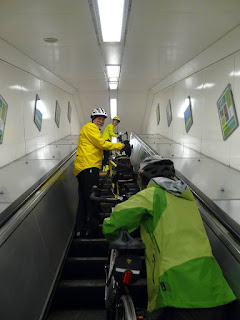 After a pleasant train journey we left James Street station in Liverpool to cycle along the waterfront into a lively little breeze??!! to have a quick look at the old garden festival site which has now been refurbished but on a much smaller scale than the original.

After turning into the breeze??again, we carried on along Otterspool prom and then went inland by the big pink cow/buffalo/hippo thing (you decide) and into Allerton.

After a brief stop at the Robin Hood Stone that I had completely forgotten about  until Bob reminded me, we visited Paul McCartney’s childhood home in Forthlyn Road, then after a bit of off road, the house in Menlove Avenue where John Lennon lived with his Aunt Mimi, both houses now preserved by the National Trust. 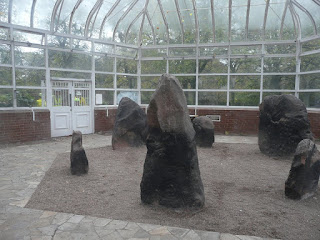 We then went through Calderstones Park and saw the stones that the park takes its name from and then headed towards Penny Lane and our breakfast stop.

On leaving the park we went down a cycle contraflow system similar to the one in Northgate Street but with stupidly large traffic calming humps which were hidden by mounds of fallen leaves, Geoff, from Wrexham Rievers unfortunately didn’t spot the first one and took a spill, but luckily was not badly hurt and was able to carry on, but it was a timely reminder to take care in the conditions at this time of year. [I hear you had to be told about this, as you carried on ahead, unaware and therefore talking to yourself?! - you did notice and come back apparently - Sue]

After our mega breakfasts and almost losing Bob to the model railway shop opposite we somehow managed to climb back on the bikes and pedal on to our next port of call Strawberry field; it was then on through Gateacre village and onto the Loopline Cycleway (similar to our Greenway).

After a few miles of Loopline we took a slight detour to go through Springfield Park, where Kath used to play as a girl when she stayed with her aunt during the summer holidays. The park is now only half its original size, as Alder Hey children's hospital have built a huge new extension on the rest of it. 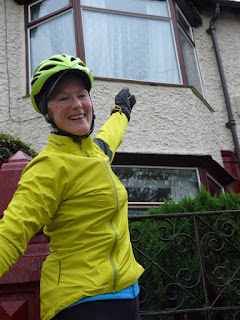 A lap of the hospital and another short stretch of Loopline later we found ourselves crossing Queens Drive and entering Bankfield Road, the look on Kaths face was a picture as she realised where she was, she was born in this road and lived there until her family moved to Wales a year or so later. 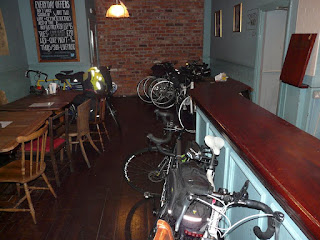 From her it was through West Derby, Childwall (past Elvis Costello’s mums house) back down Penny Lane, past Greenbank Park and through Sefton Park to The Lodge on Lark Lane, where cycle parking was actually in the bar, for more food and drink.  However, most just opted for a drink because they were still stuffed from breakfast. 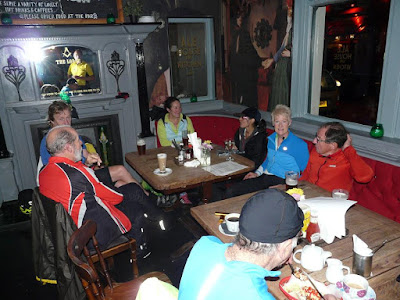 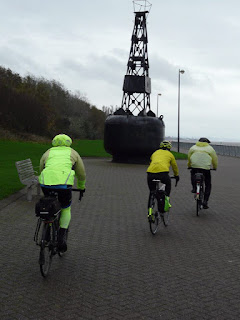 We had by now lost the light so decided to cut the route short and after a lap of Sefton Park following the 2014 tour of Britain route went through Aigburth and back onto the waterfront to retrace our way back to the station, the wind had now turned 180 degrees,  so what should have been the nice tailwind we had all been looking forward to was now the same headwind we had battled against on the way out earlier that morning, except that this time it came with a good dose of heavy rain.

Lesser cyclists may have been disheartened by this but we just had a good old sing song, a few chorus’s of “Oh I do like to be beside the seaside” and “In my Liverpool home” and we were soon on the train again heading back to Chester.

Thanks Stu for leading and for the write up; thanks to Ray for photos ('borrowed' from facebook)