New Year at The White Horse at Churton

New years day 2016, and the annual meet up to blow away seasonal cobwebs and start the new year.  The weather has been wet, to say the least, and new years eve was no exception.  However, for only the second time this winter, temperatures were forecast to drop to 1 degree which accounted for occasional lightly frozen puddles and the infrequent crunch under-wheel. 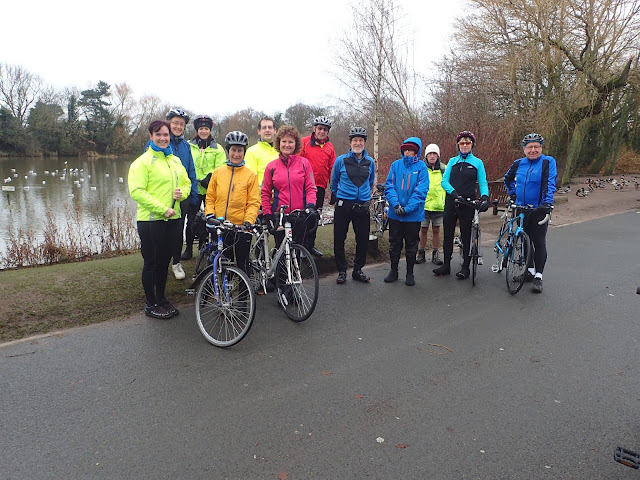 12 met at Christleton pond, it was advertised for any one from any group to meet but only Janet from Two Mills came.  I could see a stealthy heron on the far side of the pond, but we had much chatting and greeting and 'happy new year'ing to do!  A new face, and a returning face from two years ago (when the weather was so wet and cold!).

I had a plan to meet Shorts Dave at the Beeston signalling box, he was working there, with a 22 mile spin.  However, as we left a little later than anticipated and I was taking it slow (due to new faces and me having no energy!) we had to re-think, and instead headed straight to Tattenhall from Hargrave, then Chowley Oak and Coddington.  Snowdrops already appearing by the church. 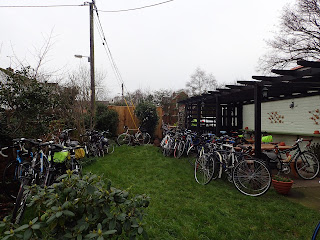 We then had a long winding lane to Churton, after a brief altercation with a pheasant who just stayed stood in the middle of the road, (Pheasant, not peasant, just to be clear!) and stayed until two of us passed either side, then it ran one way and flew over our heads, shouting at us!

No photos on route, a very ordinary ride and route, very grey day.  Photos of all in the pub, though...


Mike makes his speech (quick and to the point) and gives awards for the past year to cyclists who have achieved great things.

Harry 'The Bike' Watson is one of our oldest members.  Living just over the border his cycling exploits are of legend; staying out till 1am (midnight in the winter as a concession); he covered 500,000 miles many years back (he keeps a log book and measures each days ride when he gets home). 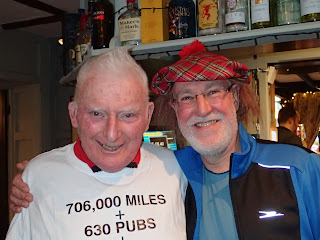 I have ridden with Harry since I was a teenager ('young Sue' he always called me; until a few years ago when he decided I was no longer young, and should call me 'middle age Sue'!), so know him quite well.  He will be seen at various locations (usually near a café or somewhere he knows he can get a brew and a cake) wearing his distinctive tartan tam O'shanter, pedal pushers and knee high red or blue socks.
By the time I had mixed and mingled briefly, Chester riders were getting their coats on, so I was unable to get a pic of our two tables. Instead, I made them line up outside!

By now, no surprise, it had started raining again.  Straight back to Aldford, up the hill to Saighton, cross the A41 to Waverton and through to Christleton, to bade farewell to the riders left.