The Childe of Hale, at Hale

The ride leader for this Sunday had to pull out, and no-one else was able to offer an alternative.  Then, the previous Sunday, Chris from Kelsall told us about his daughter (age 11) cycling Lands End to John O Groats, and did anyone want to come along and meet them or ride a little with them.  So a plan formed in my head, - and it went something like this... 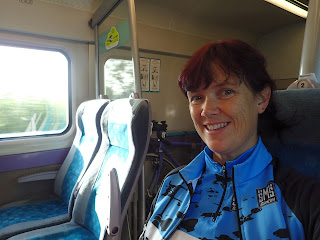 It was just me.  And I nearly missed the train, helping a lady with the ticket machine!  It is a short 20 minute hop to Runcorn East, straight after the tunnel after Frodsham.

7 miles to Esquires Coffee shop in Stockton Heath, meet Erin and Dad for a coffee. 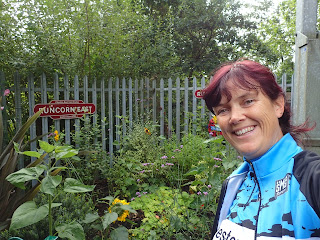 And a lovely 7 miles it was too!  Leaving Runcorn East, I picked up a small road
which crossed the Trent and Mersey Canal, crossed the railway (just before a train came) and then underneath the Bridgewater Canal, before climbing up a deep sandstone cutting (Red Brow) to near Daresbury, and the A56.  Crossing this, passing near Lewis Caroll's birthplace and the back of Creamfields (set up ready for next weekend); Appleton Reservoir with a Heron perched and into Stockton Heath. 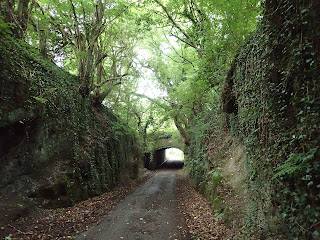 Erin and her Dad were a little later than anticipated, so I had already finished my croissant.  We chatted about the journey so far, and people they had met.  I recounted some of my memories from my LE JOG many many moons ago; we bemoaned traffic, and the usual cyclist chit chat.  All too soon it was time to part, and we loaded up amidst two small children using the cafe forecourt as a bicycle race track, occasionally running over our feet! 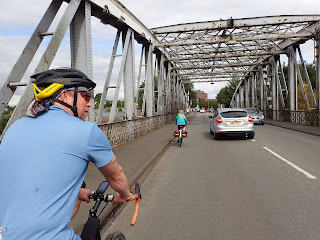 Pick up TPT, heading west, to Hale 11 miles, for lunch.


I left Erin and Chris as we crossed the Manchester Ship Canal (it must be the canal capital of Great Britain around here - there will be another one in a minute!), and I picked up the Trans Pennine Trail (TPT).  I rode it last year, but the other direction, however it did not help as it is not always as clearly signposted as it could be.

It was a lovely warm and sunny morning, people were out and about walking, picking blackberries and generally enjoying their Sunday mornings.  It is a mostly flat and very traffic free route, with some lovely sights - here are my photos...


St Helen's Canal - I told you there was another canal around here! 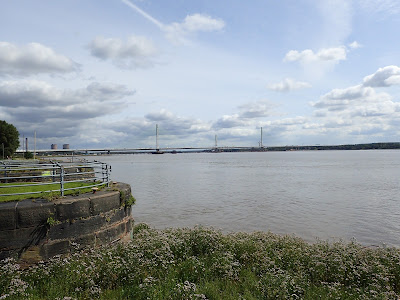 This is the view back up-stream on the Mersey to the new crossing; taken near Catalyst science museum where the re-directed TPT rejoins it's original route.

I met a chap taking a pic with his old Nokia, and offered to take one for him with him in it.  He declined, but explained that he wanted to proove to his mates at work that he really had ridden this far (18 miles from Aintree)! 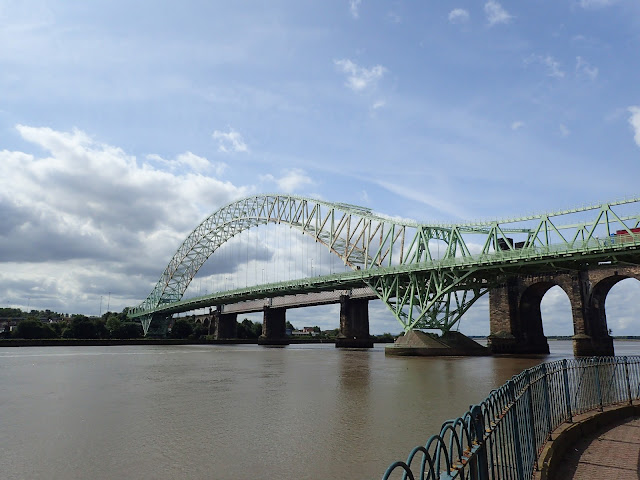 The Runcorn Bridge is one of my favourite bridges, it can be seen from so far away and is just so pretty!  It stands high above the generally low lying area around Widnes and Runcorn, and so can be seen for ages as you approach it. 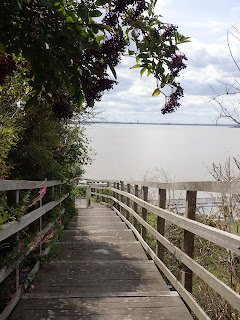 As I pedaled away from Runcorn, I was waiting for the set of zig zag steps I knew I would have to descend.  Goodness knows what Sustrans/ TPT / local council was thinking of when they negotiated the crossing of the small tributary of Ditton Brook, preceded (or followed, depending on which way you are heading) by a long set of shallow but numerous steps. 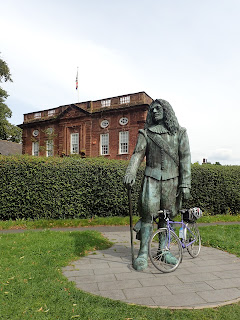 This leads us to Pickerings Pasture, another of the many 'reclaimed' country and nature parks along this stretch of the Mersey; and into Hale.


There is lots of things to see in Hale; I satisfied myself with a quick selfie with John Middleton, the Childe of Hale, who was a giant of a may at over 9 feet tall!


After a light lunch, chatting to a chap with a Cross Bike, I set off to negotiate Halewood - quite a contrast to Hale with its large thatched houses.  The trail appeared to be signposted off to the right, under an underpass.  I carried my bike through the expanse of broken glass, but could not see a way out.  I carried it back out, and circled a little, asking a local chap (who had clearly never heard of the TPT) and a couple of young lads (Youuffs) who led and directed me to the path out from the wastlelands and I was on my way.

Railway paths are nice and quiet, traffic  free, but tend to be tree lined and a little bit samey - you do not really know where you are and there is very little to see.  Hence I was stopped checking my map and location when a cyclist stopped to see if I was lost.  After we chatted, we realised we were both Cycling UK - he was with Merseyside and we knew our groups.  He was also able to direct me to route 56, which I wanted topick up next.

That was the plan, but by now time was ticking on a little, it was about 4pm.  I followed route 56, now on Liverpool suburb streets, through Sefton Park, along and through Princes Park, skirting Calderstones Park.

I headed past Liverpool Anglican Cathedral and along to Paddys Wigwam, the Catholic church.  I love Liverpool, there are iconinc landmarks at every turn!  Lime Street was my final point, where I picked up the train to come home.